Community holds the key to enhancing and restoring the natural environment. This was the resounding message at the launch of the Aorangi Forest Restoration Trust on a remote ridge top in South Wairarapa on 3 November.

Community holds the key to enhancing and restoring the natural environment. This was the resounding message at the launch of the Aorangi Forest Restoration Trust on a remote ridge top in South Wairarapa on 3 November.

More than 40 people joined the Director-General of Conservation Al Morrison for the launch on Geoff Wilkinson's hill country farm at the end of Ruakokopatuna Road.

The intent of the Restoration Trust is to enhance the natural heritage values of the Aorangi Forest Park and the private land surrounding it. Al Morrison commented that this community-run project is the future of conservation; in which boundaries of public and private land are irrelevant in regard to conservation outcomes.

The Aorangi Restoration Trust has resulted from the dedication over many years of trust chairman and local winemaker Clive Paton, of Ata Rangi Vineyard, and other committed South Wairarapa residents and business people.

Many of these landowners have achieved remarkable conservation results and are working at their own cost to enhance the bush, birds and other native plants and animals on their own properties. These properties back on to the Aorangi Ranges at various places, such as Pirinoa, Cape Palliser, White Rock and Ruakokopatuna.

Department of Conservation Wairarapa Area manager, Chris Lester commended the local landowners who had recognised that making progress required effort over a wider area. The project therefore had been expanded to the entire forest park and adjacent private land. 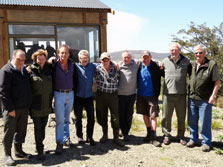 Participants at the launch of the Aorangi Forest Restoration Trust

“This has shown how vital the support of the wider community is to the achieving restoration objectives."

Forest & Bird Lower North Island field officer Aalbert Rebergen is excited to be part of the nine-person trust that will manage restoration projects in the park. Aalbert says there are already small restoration projects happening in the area, but agrees with DOC that wider community involvement is needed to make significant steps in restoring the health of the forest.

“There are projects happening in isolation and on the fringes of the park. There are some people getting projects off the ground but they’re struggling because they don’t have the support. The Aorangi Restoration Trust can help facilitate and activate volunteers. I see it as an opportunity for Forest & Bird members and supporters to get their hands dirty on smaller site projects,” he says.

Aalbert believes the forest area has huge restoration potential. “It has some stunning features and biodiversity. But predators are a serious issue and weeds to a lesser extent. We’re still learning more and more about this area. There are little treasures in there that we’ve only just found in the last decade.”

Greater Wellington Regional Council has been controlling possums and rats since 2004 on 1030ha of native forest on private land behind Pirinoa as part of its Key Native Ecosystem programme. Greater Wellington senior biosecurity officer Ray Clarey says the landowners have always been highly motivated and it is "fantastic" that they have grown the vision to take in the whole Aorangi Forest Park.

The restoration project intends to reverse the degradation of local indigenous species through the eradication of introduced pests and predators from the forest and surrounding farmland. The long term vision is to enable the reintroduction of locally extinct species and to ultimately reintroduce species such as kiwi, whio (blue duck), weka and other forest birds which once graced the Aorangi forest.