International experts welcome the return of bellbirds to Motutapu

Hot on the heels of two native bird species reappearing on Motutapu, one of New Zealand's best known songbirds - the bellbird - has also been rediscovered on the island.

Hot on the heels of two native bird species reappearing on Motutapu, one of New Zealand's best known songbirds - the bellbird - has also been rediscovered on the island.

The return of the bellbird, after more than 100 years' absence, follows one of New Zealand's largest ever island pest eradication programmes on Motutapu and Rangitoto Islands last year.

Kakariki (parakeets) began breeding on Motutapu in December, and pateke (brown teal) were spotted on the island in early February. 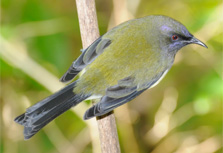 Bellbirds have returned to Motutapu after more than 100 years' absence

The sighting of bellbirds comes as more than 80 international and national delegates gather in Auckland this week at a workshop led by the Department of Conservation on tackling threats to wildlife on islands around the world.

'Helping Islands Adapt' workshop Chair, Dr Spencer Thomas from Grenada, a councillor on the global conservation network, IUCN, said the return of the bellbird and other native species to Motutapu is hugely significant for all conservationists working with vulnerable island ecosystems.

"It is precisely these sorts of successes that show the importance of island nations sharing strategic and technical skills in the fight to keep their native species alive.

"New Zealand has had some great successes in breathing life back into some of its islands. The UN has declared 2010 the International Year of Biodiversity - by working together we can improve the chances of survival for threatened wildlife and plants on islands around the world.

No rats, mice or stoats have been detected on Motutapu and Rangitoto since the last of three aerial drops of bait containing brodifacoum in August last year. Trapping, hunting and spotlighting to ensure the eradication of feral cats, hedgehogs and rabbits will continue for at least another year.

"It's likely that these bellbirds have come from rodent-free Rakino Island, as it's less than two kilometres from Motutapu," says Richard Griffiths, project manager for the Department of Conservation's pest-eradication project on Rangitoto and Motutapu.

Neil Lorimer, a volunteer for the Motutapu Restoration Trust, was the first to hear one of the bellbirds. He thought at first it might be a tui, but it didn't sound quite right. A few days later the mystery was solved.

"Three other volunteers and I were doing some weeding when the bellbird started singing. This time I managed a good sighting," he says.

Mr Lorimer says the members of the Trust are delighted that three native bird species have returned to Motutapu in just four months.

"It's a credit to all our volunteers who have planted the 500,000 trees that make Motutapu suitable for our native forest birds," he says.

The bellbird, or korimako, has been almost completely absent north of the Bombay Hills since the 1860s. In the Hauraki Gulf Marine Park they survived on offshore islands such as Tiritiri Matangi and Hauturu/Little Barrier. In 2005 they made their own way to Rakino Island and the Tawharanui Open Sanctuary - a predator-free mainland island.

"Now that bellbirds have been seen on Motutapu, there's a real prospect that they may soon start turning up in Aucklanders' backyards," says Mr Griffiths.

He says that visitors to the islands can help these new arrivals survive by checking their boats and gear for rodents before they depart.

"We want to make sure that pests aren't inadvertently reintroduced," he says.

The melodious bellbird is still widespread but mammalian predators keep their numbers low.