Rachael Thorp plays down the fact that she was the only female among the first contingent of 52 New Zealand firefighters to help fight the devastating Victorian fires in February.

Rachael Thorp plays down the fact that she was the only female among the first contingent of 52 New Zealand firefighters to help fight the devastating Victorian fires in February.

“As long as you pull your weight and do your bit is what counts. We all get the same training, and need to achieve the same fitness levels to be able to fight these major fires,” says Rachael, one of the few people to have achieved a national diploma in vegetation fire fighting.

In the scale of “major fires”,  the Victorian fires – covering some 500,000 hectares and claiming 210* lives - surpassed any other that Rachael has encountered.

Rachael has twice helped control wildfires in the United States. But the heart wrenching television reports that prompted Rachael to offer her services, did not prepare her for what she saw with her own eyes. 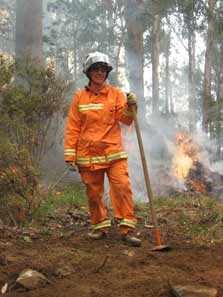 Firefighter Rachael Thorp on the
job in Victoria

“You’re a firefighter first and gender comes second,” is the Wellington-based Department of Conservation fire officer’s response to media pursuing the “novelty” angle of a woman among the ranks of kiwi rural fire fighters enlisted to help tackle what’s been described as the largest single civil disaster in Australia’s history.

“I was prepared for the scale of the fires, but not the devastation and loss of life. In the States you see burnt houses without the loss of life.

“But in Victoria…We talked to firefighters who had lost friends, firefighters who were working to keep busy so they didn’t have to face going home and dealing with their loss - property, family, friends.”

She was flown over some of the worst affected areas, including the township of Kinglake, where almost the entire community was destroyed with many lives lost.

“It was a pretty sobering sight, as if a blow torch had been over the land. The fire had just incinerated everything. I’ve never experienced anything like that before.”

The New Zealand crews were helping to protect Melbourne’s water supply in the Upper Yarra Valley, an area covering around 87,000 hectares, digging hand lines (small fire breaks), and back burning out from bulldozer lines. 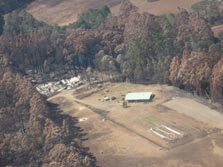 A property in Kinglake, one of the
worst affected townships, remained
intact while others nearby were
reduced to ashes

As a field liaison officer based out of the Woori Yallock incident control centre, Rachael was responsible for the welfare of the nine New Zealand crews and providing a link between the incident management team and those working out in the field. She attended planning meetings, and undertook such crew welfare tasks as charging cell phones and shopping for chainsaw files and other equipment that was normal issue for Australian firefighters. She was also able to venture out to see the scale of the Kiwi fire-fighting efforts and the fire-ravaged countryside.

Taking on this role for a large scale fire was a novel experience for Rachael, more used to being on the end of a hose or managing helicopters. It provided her valuable on the job training.

“I didn’t hesitate when I was offered the liaison role as I saw it as a great chance to get some experience at the management level.”

“You get to see how lots of resources are managed, how the planning is done, and operationally how they manage large fires. Workplaces benefit from staff taking up these deployment opportunities because we learn skills and experience at a level that we rarely (thankfully) see in New Zealand.” 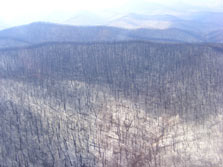 The fire-ravaged Victorian landscape,
which Rachael likens to the work
of a blow torch

Like her New Zealand and Australian colleagues, Rachael put in the hard yards, working from 6am until around 9 to 9.30pm. The weather had thankfully “cooled” to around the mid to low 30s so the conditions were bearable. But high temperatures and the drought which preceded the fires, had made the area hazardous.

“The trees were already dry so when the fire went through there were a lot of trees falling down.”

A tree falling on a fire truck claimed the life of an Australian firefighter in another fire zone.

Rachael says the incident controller was impressed with the efforts of the good humoured kiwi crews, thanking them all on their last day.

“They were great to work with. We all got along well.”

Although reluctant to bring up the gender issue, Rachael encourages other women interested in firefighting to “give it go”.

“I love this job with the excitement and the adrenaline rush you get at some of the bigger fires.  I’ve learnt new skills and have been able to travel to different parts of the world. But it’s not just about putting out fires.  It’s more about being able to help protect lives, property and conservation values and doing my bit to help the community.”

Rachael, who works for DOC’s Wellington Conservancy, focuses much of her effort here on helping prevent fires. New Zealanders watching the Victorian tragedy unfold from the safety of their living rooms, shouldn’t be complacent, she warns.

“It brings home to New Zealand that we need to be vigilant in rural areas, especially in Wellington where we have a huge rural/urban interface. There’s a potential here to lose property if a fire gets out of control. A combination of a dry summer and north west winds could be quite disastrous.

“We encourage people to have a defensible space around their properties -  a ‘lean, clean and  green’ area of 20 metre from the walls of houses with minimal amounts of flammable vegetation, no dead vegetation or other flammable debris, and plants that are healthy and green during the fire season.”

* The official death toll from Victoria's bushfires was reduced to 173 following the publication of this article.