Knowledge gleaned about Wellington’s marine environment over more than century, has been brought together in an interactive CD, to help guide decision makers.

Knowledge gleaned about Wellington’s marine environment over more than century, has been brought together in an interactive CD, to help guide decision makers.

Department of Conservation marine ecologist Helen Kettles said a lack of accessible information on the marine environment prompted the department to create a repository of marine research.

“When issues arose, agencies involved in managing the marine environment had to go digging for information to guide them.”

“It was time consuming and there was potential for duplication of effort. The marine environment coming under increasing pressure from coastal development, marine energy, fishing, pollution so it’s important to have easily accessible information to help make good decisions.” 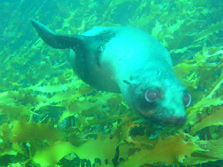 Information for the Wellington Marine Information CD was gathered from a variety of sources, including government departments, councils, and the National Library, and collated into a searchable bibliography. It references 1381 reports and scientific papers that can be searched for by key word or location. Where possible, links have been made to full reports online.

“Finding the information was quite a mission,” says Helen Kettles.

“I felt like I was on an archaeological dig. Once I started peeling away the layers more and more information surfaced. I was amazed at what I uncovered.”

She found a 1964 fisheries stock report for whales in Cook Strait (before they were protected in New Zealand waters), drawings of quirky deep water snipe eels, maps of tidal current patterns between Mana Island and Titahi Bay, information about sewage pollution and algal bloom effects, and reports describing how Wellington Harbour was formerly a freshwater lake, and what Lyall Bay and Evans Bay looked like before the airport was built.

“There are also recent reports of the unusual life forms that live on chimneys created by methane seeps at the bottom of canyons in Cook Strait.”

“It’s great that people have been reporting the unusual creatures they see. I found an 1888 report of a 25  cm hapuka caught in Wellington Harbour and there are also reports of sunfish, and turtles in our waters.  They’re generally found in warmer waters.

“We owe thanks to many people and agencies, such as Greater Wellington Regional Council, who helped find information for the CD.”

It covers the marine environment from the southern side of the Manawatu River Estuary on the west coast to Waimata River (south of Cape Turnagain) on the east coast.

“A third of the bibliography entries focus on Wellington Harbour, indicating the high level of activity there that often drives the need for information.”

Ms Kettles says the CD is easy to use, interactive and colourful, featuring more than 150 maps and 200 stunning photos showcasing Wellington’s marine world.

“While it’s targeted at government and local government agencies, it will also be of interest to environmental consultants, researchers, community groups caring for the coast and marine environment.”

“Anyone with an interest in the marine environment will discover something of interest on this CD.”

The CD can be purchased for $10 from the Wellington Visitor Centre in Manners Street. It will be launched at the next Blue Wellington event on Wednesday 7 October in the back function room of the Southern Cross Bar (6pm – 8pm). Blue Wellington is a forum set up by Forest and Bird to encourage the sharing of ideas and improve the health of Wellington’s coastal and marine environment.