A seal severely injured and being strangled by packaging tape was put down by Department of Conservation staff in the Wairarapa last week.

A seal severely injured and being strangled by packaging tape was put down by Department of Conservation staff in the Wairarapa last week.

Responding to a call from the public, DOC staff found the seriously distressed young seal near Glenburn on Wairarapa’s east coast, with plastic tape bound tightly around its neck.  It appeared to have been entangled for a prolonged period. DOC ranger Joe Hansen said the tape had cut deeply into the seal’s flesh and the wounds had become badly infected.  Although the animal was lethargic and obviously fatally ill, there was no way to remove the tape, he said.

“There were vast amounts of flies and deep tissue wounds were obvious. Unfortunately the only practical solution was to put the seal down immediately. 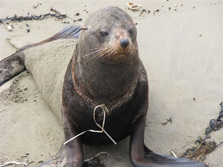 “Seals are nervous of humans and if approached they tend to head for the sea.  We didn’t want the seal to return to the sea and consequently endure further suffering. We couldn’t get close enough to remove the tape, so it had to be quickly and humanely dealt with.”

DOC suspects it may be the same distressed seal reported by the public in the same area a few months earlier, judging by the extent of its injuries. On that occasion, DOC rangers had been unable to locate the seal.

Mr Hansen said the incident served as a grim reminder of the need to dispose of rubbish “thoughtfully and responsibly.”

“Many items discarded into rivers, lakes and the sea can be harmful to animals, particularly inquisitive ones such as seals and dolphins.  Cut your plastic tape or string, especially if it’s not biodegradable, and avoid indiscriminate disposal so that it doesn’t result in this type of damage and suffering to animals.

Another frequent cause of dolphin or seal entanglement problems is abandoned or lost fishing nets.  Care must be taken to set nets appropriately and to check them regularly.

Enjoy fur seals from a distance, however it is important to remember that they are wild animals that carry infectious diseases and they will defend their territory aggressively. If you find a seal that is severely injured, or entangled in marine debris, or being harassed by people or dogs, please call the 0800 DOCHOT line (0800 36 24 68) as soon as possible.