Despite all the doom and gloom, the recession hasn’t affected all Kiwi families.

Despite all the doom and gloom, the recession hasn’t affected all kiwi families. It has been a bumper breeding season for a local population of Eastern North Island Brown Kiwi, living in the North West Ruahine ranges.

Two adult male kiwis fitted with transmitters, Rua and Black, have been busy boys this breeding season. Between October 2008 and February 2009, their nests were each raided twice, resulting in four fertile eggs and two chicks being lifted from the Ruahine Corner area over the season.

Kiwi eggs and young chicks are extremely vulnerable to predation from pests like stoats and rats. Rua and Black are part of Operation Nest Egg (ONE), a programme that aims to increase kiwi survival rates by removing eggs from the wild and hatching them in captivity. Adult male kiwis are fitted with transmitters so their breeding behaviour can be monitored. The Department of Conservation (DOC) is working with the Aorangi Awarua Trust and the Cape Kidnappers Wildlife Preserve to help boost Ruahine kiwi numbers.

Egg lifters must locate the nests, and then wait for kiwi to go feed at night before removing the eggs. This avoids the egg being cracked during a scuffle. Once chicks reach over 800g in weight, they are better able to defend themselves against stoats and are released back into the wild.

There are plans to put radio transmitters on at least two more male kiwis in the North West Ruahines in the future. “That means four nests to check during the next breeding season which makes for a busy year ahead”, says DOC biodiversity ranger Lorraine Cook.

A total of four Ruahine kiwi chicks have been released back into the Ruahine ranges over the last two breeding seasons, with three more from this season destined for the Cape Kidnappers Wildlife Preserve. 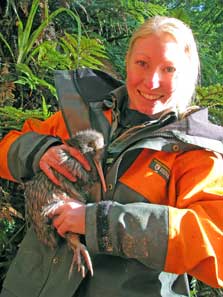 The last release into the North West Ruahines took place in March 2009. Te Awhina was lifted from the Ruahines as a chick in October 2008 and grew up at Kiwi Encounter in Rotorua. Te Awhina was returned to his original home during a trip to extend the Te Potae O Awarua stoat trap-line across Aorangi Awarua Trust land.

This is the second extension to the original 20km trap-line, which is monitored monthly by volunteers. A 30km extension heading east through the Ikawetea Valley was added in March 2008. The 2009 extension veers north along Ohutu Ridge before it drops down and heads east over the amazing tussock country of the Aorangi Awarua Trust land. “The latest extension forms a protective loop around the original Te Potae O Awarua line, adding an extra barrier to any stoats and rats trying to get in”, explains Ms Cook. The Aorangi Awarua Trust will run this part of the trap-line. Both extensions were made possible by financial support from Nga Whenua Rahui and Andy Lowe of Hill Country Corporations.

Te Potae O Awarua also benefits whio (blue duck). The Ruahine Ranges are now the southernmost North Island home to this species, which was once widespread across the whole country. These unique native ducks are threatened by habitat loss and predation. However, recent community projects like Te Potae o Awarua and the New Zealand Deerstalkers Association Oroua Blue Duck Protection Project offer hope for whio and other native bird species in the Ruahines.