A rare Gray’s beaked whale which stranded and subsequently died on a Kapiti beach this week may have been nursing a calf.

A rare Gray’s beaked whale which stranded and subsequently died on a Kapiti beach this week may have been nursing a calf.

The 4.8 metre female whale was found on the beach just south of Whareroa Stream mouth, between Raumati and Paekakariki on Tuesday afternoon, by Department of Conservation staff, responding to a call from the public. The whale died soon after they arrived at the scene.

Preliminary findings of an autopsy undertaken yesterday by Te Papa Marine Mammal Collections Manager Anton van Helden have shown that the whale was pregnant with a 20cm foetus in her uterus. 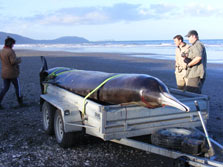 “Surprisingly it appears she may have also been nursing a calf as there was milk discharging from her mammary glands,” Mr van Helden said.

However there has been no sign of the calf and DOC is appealing to the public to keep an eye out for it and report to it any sightings or strandings to the 0800 DOC HOTline (0800 362 468).

“It is unlikely that the calf will be able to fend for itself without its mother but it will depend on the age of the animal and whether it was near weaning,” Mr van Helden said.

He was excited by the discovery of the whale which would provide a valuable insight into the breeding of its species.

DOC biodiversity programme manager Richard Gill said the whale was in excellent body condition apart from abrasions on its tail, likely to have been caused by being stranding on the beach, and a fresh bite mark on its abdomen, caused by a cookie cutter shark. Such bites are common on beaked whales and because the bites are relatively small and superficial the wounds do not cause serious injury to the animal.  This wound is unlikely to be related to the whale stranding and its subsequent death.

The whale was buried where it stranded yesterday. The whale and the burial site were blessed by Te Runanga o Te Ati Awa ki Whakarongotai.

The whale’s head will be held at Te Papa for further study as part of a national project to determine variability in the anatomy of the skulls in the NZ Gray’s beaked whale population.