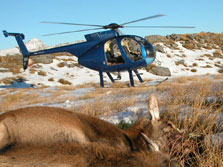 “We have just completed a series of workshops with permit holders and stakeholders to help us develop this draft new WARO permit,” says Canterbury Conservator Mike Cuddihy.

“Current WARO permits have been used by some operators for heli-hunting which is controversial with recreational hunters.”

“We intend to make clear what a WARO does and does not cover by putting in place a new generation of concession documents specific to each activity (or activity group) such as carcass recovery, the capture and convey of live animals and heli-hunting,,” he says.

The department has developed an activity framework to clarify the status of wild animal recovery operation permits. The new permits will be implemented from 1 October 2009.

“We recognise the importance of commercial hunting as a control tool. Commercial deer recovery provides between 1-2 million dollars of free deer control annually and contributes to the national economy through exports. Recreational hunting is also recognised as a healthy recreational pursuit that is enjoyed by many people,” Cuddihy states.

“As the Department of Conservation we need to encourage both recreational and commercial hunting opportunities on public conservation land. Achieving this goal within the new concession permit is proving to be an interesting exercise for us."