Fire fighters at Mahia are concerned that a predicted southerly wind will fan a blaze that damaged six buildings and caused evacuations of houses in the area.

Fire fighters at Mahia are concerned that a predicted southerly wind will fan a blaze that damaged six buildings and caused evacuations of houses in the area. Incident Controller for the fire, Don Scott of the Gisborne District Council, said that it is unlikely that the Mahia fire will be extinguished tonight. 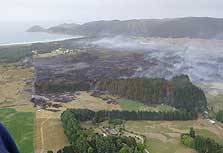 “The Mahia fire was reported in the early afternoon and we had already been busy with another fire north of Tolaga Bay plus some others. Weather conditions on the East Coast have been getting extreme over the last few weeks and today was one to really stretch us,” Mr Scott said.

Details on the fire are difficult to obtain as radio reception in the area is poor, but is it believed to have started on land formerly used by the YMCA and spread through pine trees and scrub towards Kaiwaitau Road.

Crews from several agencies including the Department of Conservation and the Gisborne District Council are currently fighting the fire. New Zealand Police have assisted with evacuation of local residents.

“The number and various locations of fires today have demonstrated the extreme conditions we have on the East Coast at present. We urge people to take great care because in current conditions, it takes very little time for a major fire to develop,” Mr Scott said.