The Department of Conservation and Horizons Regional Council have launched the largest new biodiversity initiative in New Zealand, Kia Wharite.

The Department of Conservation and Horizons Regional Council have launched an ambitious new project, Kia Wharite, which literally means to work in partnership with iwi and landowners to restore some of New Zealand’s most iconic species in and around Whanganui National Park.

Conservation Minister Tim Groser and Horizons Regional Council chairman Garrick Murfitt opened the project on a recent two day visit to the Whanganui National Park. The Minister also met with Whanganui Iwi at Pipiriki and Tieke kainga and with local landowners during his visit. 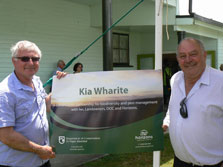 The Kia Wharite project is the largest new biodiversity initiative in New Zealand. The Department of Conservation and Horizons Regional Council are investing $5 million over the next five years. The project will result in greatly increased pest control in Whanganui National Park and on neighbouring private land with landowner’s permission.

The project will focus on managing pests such as possums and goats which destroy native bush and tackling predators such as rats and stoats which threaten native species. The area has one of the most important remaining blue duck populations in New Zealand, uniquely centred on private land in the Ruatiti and Retaruke valleys. The largest remaining brown kiwi population in the North Island is found in Whanganui National Park.

Better protection of the bush will benefit waterways through reduced erosion and improved water quality. Improved pest control also has the potential to see more carbon stored in native forests.

Mr Groser said “This type of collaborative project is a model for conservation projects. It has the potential to benefit some of our most iconic species and landscapes. The conservation economy is vital for New Zealand’s tourist industry.”

Every year thousands of tourists visit the Whanganui National Park to experience the parks cultural, landscape and wildlife values.

Chairman of Horizons Regional Council Garrick Murfitt said “On private land, Horizons is looking to build on the tremendous work that many landowners are already doing to conserve species like blue duck and to protect areas of bush.”

Kia Wharite is a major new biodiversity initiative funded jointly by the Department of Conservation and Horizons Regional Council. Each organisation has committed initial funding of $500,000 per year for each of the next five years.

To implement the project both organisations will work through partnerships with iwi and landowners. The Department of Conservation will focus on work in Whanganui National Park and Horizons Regional Council on work on private land.

The project will seek to

Protection of bush through enhanced pest control will benefit both the species that live in the bush and will also assist erosion control, maintenance of water quality and flood control.

Brown kiwi on the North Island are currently declining at 3-5% per annum in areas where predators are not managed. This is primarily a result of chicks and juveniles being killed by introduced stoats. Adult kiwi are also killed by dogs. Whanganui National Park and associated areas of bush hold the largest remaining population of brown kiwi on the North Island.with several thousand pairs. The population in the project area is estimated as 1500 pairs.

Blue duck are endemic to New Zealand. Less than 2000 birds remain. Where introduced predators, principally stoats, are not managed duck populations continue to decline. Research funded by the Central North Island Blue Duck Trust has resulted in a successful trapping regime being designed. The Kia Wharite project will implement this regime along 50 km of the Manganui-a-te-ao and Retaruke rivers.