'Staying Safe - Managing Volcanic Risk on Mt Ruapehu' is a new DVD launched on 14 May 2009. It provides easy to follow information on what we want to know about volcanic hazards and what ski area patrons should do.

A new DVD was launched at the Whakapapa Visitor Centre on Thursday evening, 14 May 2009.  'Staying Safe - Managing Volcanic Risk on Mount Ruapehu' is a 12 minute presentation demonstrating very effective, updated and easy to follow information on what we want to know about volcanic hazards and what ski area patrons should do.  It has been produced for multiple audiences including staff and visitors to Whakapapa and Turoa ski areas. 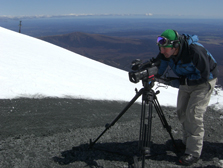 Getting the best shots meant getting
out on the lahar path

The premier was very well attended by staff from Ruapehu Alpine Lifts, Department of Conservation, the local Search and Rescue organisation, Ruapehu District Council, owners of Ski Businesses’, hotels, lodges and concessionaires.  Some travelled from as far as Taupo, Taumarunui, Ohakune and Turangi, while others came from National Park and Whakapapa Village.

The DVD is a result of a science programme led by GNS Science that started in 2000 looking for practical ways to reduce risks from eruptions involving education, training and awareness.  It was produced by Flying Saucer Films with assistance from DOC, RAL and GNS Science.  It replaces an earlier video version filmed and produced by and starring, Mr Mark Woods (aka Budgie) in the early 1990s.

“When managing volcanic risk on Ruapehu it seems that there is always a major dilemma” said Dr Harry Keys, DOC Scientist, when introducing the new DVD.  Eruptions can happen without any warning and produce potentially very dangerous lahars but these don’t threaten people all that often, fortunately!  “The dilemma is what is the best way to reduce risks from these high consequence, low probability eruption lahars entering Whakapapa Ski Area” said Dr Keys.  Since the ski area was developed, such lahars have occurred at intervals of 6 to 20 years.  “It’s almost 40 years since the first such lahar in June 1969 but less than two since the last.  Two of these events, in 1995 and 2007 were very near misses.  These are some of the factors driving the upgrade of the Eruption Detection System which is currently underway, and with which this DVD is associated” said Dr Harry Keys.

The DVD is soon to be posted on this website and RAL website www.mtruapehu.com and will screen at both the Whakapapa and Ohakune DOC Visitor Centres.

If your organisation is interested in securing or showing the DVD, please contact Department of Conservation, Ruapehu Area Office, phone: +64 7 892 3729 or email tongarirovc@doc.govt.nz