Kākāriki breeding on Motutapu for first time in 100 years

They’ve been gone for more than 100 years, but last week, a family of red-crowned parakeets was spotted flying down from the trees in a peaceful gully on Motutapu.

They’ve been gone for more than 100 years, but last week, a family of red-crowned parakeets was spotted flying down from the trees in a peaceful gully on Motutapu.

Luis Ortiz-Catedral, parakeet specialist and Massey University PhD student, says one of the birds was clearly a recently fledged juvenile that must have hatched on the island.

“I estimate it fledged about two weeks ago considering the size of the tail, the colouration of the beak and also because it was still being fed by its parents,” he says.

Red-crowned parakeets - one of five main species of kākāriki - were recorded on Motutapu in September by the Ornithological Society of New Zealand (OSNZ). The OSNZ conducts bird surveys for the Motutapu Restoration Trust every year. Mr Ortiz-Catedral joined them last week to look for signs of breeding parakeets. 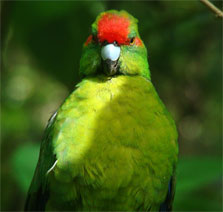 Only the male of the pair was banded, and had been released on nearby pest-free Motuihe eight months ago.

Motutapu and Rangitoto are on their way to becoming pest-free after the Department of Conservation began a two-year campaign to rid the islands of seven remaining mammalian pests in June this year.

Richard Griffiths, project manager for the Rangitoto and Motutapu restoration project, says it’s exciting to see kākāriki back so soon - but says we must look after them.

“Now that native birds are nesting on the islands, it’s more important than ever before for visitors to ensure they don’t accidentally bring any pests with them,” he says.

While parakeets like to forage in open areas with bush close by to provide cover, the one factor that influences their survival the most is the presence or absence of predators, says Mr Ortiz-Catedral.

He says the fact that parakeets have made their own way to Motutapu so quickly after most of the pests were removed will attract international attention.

“Natural colonisations of islands by parrots are not common. The Hauraki Gulf is becoming a worldwide example of how restoring key sites can help surrounding islands too - it happens so often here that we tend to lose perspective.”

Motutapu Restoration Trust chair Chris Fletcher says that when Auckland artist Emily Karaka and her daughter planted the first of the now 500,000 trees on Motutapu, they dreamed this might happen one day.

“What better present for all the thousands of volunteers involved to have these kākāriki breed on Motutapu just before Christmas,” she says.

The International Union for Conservation of Nature (IUCN) has recently classified parakeets as a species vulnerable to extinction.

In the Auckland region, red-crowned parakeets are found on Tiritiri Matangi, Little Barrier, Great Barrier, Motuihe, Tawharanui Regional Park and now Motutapu.
They are also found on the Mercury Islands, the Hen and Chickens Islands and the Poor Knights Islands.