Twenty one kākāpō chicks have been taken to a special hand-rearing facility in Invercargill to secure their chances of survival.

Twenty one kākāpō chicks have been taken to a special hand-rearing facility in Invercargill to secure their chances of survival. 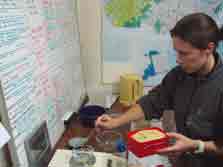 The chicks are among the 34 which hatched on Whenua Hou/Codfish Island this breeding season, bringing the critically endangered kākāpō population to 125.

Kākāpō recovery team leader Deidre Vercoe said unfortunately not enough rimu fruit had ripened on the island for all 27 mothers to feed their chicks on.

Ms Vercoe said some mothers were struggling to keep up with the demands of their hungry offspring, so in order to ensure their survival some of the chicks are being hand-raised.

“We knew it was going to be a cracker breeding season, but we didn’t know exactly how many chicks there would be, or if there would be enough food. We planned for the possibility of hand-rearing right from the beginning.”

For the kākāpō team, hand-rearing means around-the-clock care and lots of feeds. The younger chicks need at least 10 feeds a day while the older ones are on about five feeds a day.

“This has been a massive and pretty intense breeding season, but everyone has been amazing. Their efforts have made this an incredible year for the recovery effort,” Ms Vercoe said.