The Kākāpō Recovery effort is one step closer to bringing the world’s kākāpō population to 100 after the successful hatching of two kākāpō chicks.

The Kākāpō Recovery effort is one step closer to bringing the world’s kākāpō population to 100 after the successful hatching of two kākāpō chicks.

The latest additions bring the small but increasing population to 93, and lots more chicks are expected in the coming weeks. 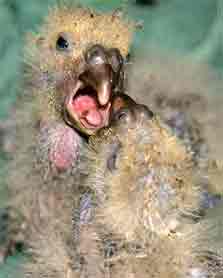 As well as the 25 confirmed fertile eggs yet to hatch, there are another eight to be checked and seven more females are ready to nest.

Volunteers and Kākāpō Recovery staff are keeping a close eye on the two chicks and monitoring their progress.

These chicks, from the same nest, could very well be the descendants of Richard Henry, the only surviving kākāpō  from Fiordland. His genes are valuable to providing genetic diversity to the kakapo population.

“It is such an exciting time for Kākāpō Recovery with so many breeding aged females having mated and with more matings happening, things are going to get even busier on the island,” Kākāpō Recovery team leader Deidre Vercoe said.

Out of the 38 breeding aged females, 27 have mated and expectations are that this season will end with 80 percent having mated.

“It will be awesome to bring the kākāpō population to more than 100 and all signs are indicating that could very well happen. If this breeding season produces 30 to 40 chicks it will be a huge step in the recovery of this species,” she said.

Ms Vercoe said it was a breeding season like this which the Kākāpō Recovery programme had been building up to.

Kākāpō only breed every few years when the rimu fruit is right, so this breeding season is even more incredible given six chicks were produced in 2008.

“The rimu fruit is the unknown for us,” Ms Vercoe said. “If it doesn’t ripen there won’t be enough fruit for the mothers to feed their young and we will have to look at bringing the chicks to the mainland and hand-rearing.”

Ms Vercoe said at this stage it could go either way. “Ideally we would like the chicks to remain on the island.”

For regular updates on the breeding season visit the Kākāpō Recovery website.