Iwi cooperation to save kiwi in the Bay

Several Bay of Plenty and Waikato iwi have come together to loan four North Island brown kiwi to Tuhua (Mayor) Island and Te Whanau a Tauwhao, helping to secure the long term survival of the species in the region.

Several Bay of Plenty and Waikato iwi have come together to relocate four North Island brown kiwi to Tuhua (Mayor) Island and Te Whanau a Tauwhao, helping to secure the long term survival of the species in the region. Two adult birds from within the rohe of Ngamanawa and Raukawa, plus two chicks from the rohe of Ngati Awa were transferred to Tuhua as part of conservation work to maintain the regional blood line. 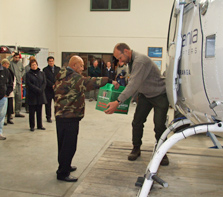 The two adult kiwi captured in the Opuiaki Forest, near Tauranga were only discovered last year by Department of Conservation (DOC) staff. Monitoring over the last twelve months has shown no sign of breeding success so the pair have been transferred to give them a better chance to raise chicks.

The only confirmed remaining original kiwi in the Kaimai Mamaku Forest Park were farewelled by iwi at Waitaha Lodge. The pair, Waipapa (male), and Raukura (female) were named by Ngamanawa and Raukawa respectively and members of both iwi attended the release ceremony.

The two female kiwi chicks, Mako and Kahikatea, were raised in captivity under Operation Nest Egg™ (ONE) at Kiwi Encounter, in Rotorua. In the wild less than 5% of kiwi survive to adulthood, so Operation Nest Egg was used to recover kiwi eggs from Ohope and raise the chicks in captivity until they are large enough to fend for themselves. Representatives of Ngati Awa were involved in the powhiri on behalf of the Ohope Scenic Reserve Joint Mangement Committee.

“The loan of these birds by Ngamanawa, Ngati Awa and Raukawa will contribute genetic diversity important to build a healthy population on Tuhua and is a crucial step to ensure the survival of kiwi in the Bay,” said Dave Wills DOC Project Manager.

DOC and the Tuhua Trust have been working towards restoring Tuhua (Mayor) Island to its original ecosystem since the 1990's. Tuhua has been pest free since 2000, following an intensive pest control programme to remove feral cats, two species of rats and pigs.

The dawn chorus is already returning with North Island robin, kaka and bellbird regularly seen and heard on the island. Many species rare on mainland New Zealand have been transferred to the privately owned wildlife refuge with the support of the Tuhua Trust Board including North Island brown kiwi, pateke (Brown Teal) and tuatara.

“It is hoped that the Tuhua population grows so that in the future chicks can be transferred back to support mainland populations,” said Dave.

“In Tauranga, DOC was involved with the first release of captive reared kiwi on Tuhua (Mayor Island) in 2006 and in the Otanewainuku Forest in 2007. Together these populations will help ensure the long term survival of the species in the Western Bay of Plenty,” said Dave.

Kiwi were once widespread throughout New Zealand but have become rare due to introduced predators and habitat destruction. Kiwi are particularly vulnerable to predation by stoats and cats until they are 9-12 months old. This translocation project is part of a wider national programme to save the kiwi.