Department of Conservation staff and volunteers attending the Onoke Spit beach clean-up last Friday were dismayed to find that the historic wreck of the ship Addenda had been vandalised during the previous week.

Department of Conservation staff and volunteers attending a beach clean-up at Wairarapa's Onoke Spit last Friday were dismayed to find that the historic wreck of the ship Addenda had been vandalised during the previous week.

The remains of the vessel, which ran aground with no loss of life in 1904, are buried near the eastern end of the spit. A small number of iron hull fasteners are visible above the sand. The site is located on Crown land and protected under the Conservation Act. 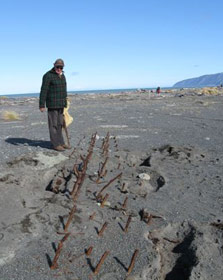 “Several holes had been dug around the wreck, exposing the timbers, and it appeared that pieces of timber may have been removed,” DOC Wairarapa Area manager Chris Lester said.

“It looks as though someone started digging out of curiosity and decided to take a souvenir. The historic nature of the wreck is clearly marked on interpretive signage at the entrance to the spit. Even just exposing the timbers to air means they will start to deteriorate faster.

“We would appreciate the public letting us know if they see vandalism on Crown land or, if serious, reporting it to the police,” Mr Lester said.

DOC staff are now considering placing signage at the wreck site, telling its story and emphasising its protected status.

“Our message is look at the site and appreciate it, and leave it for other people to enjoy”. ENDS