A rare dolphin residing in Wellington Harbour has been confirmed as a male Hector’s dolphin.

A rare dolphin residing in Wellington Harbour has been confirmed as a male Hector’s dolphin.

Sporting the distinctive rounded dorsal fin which is a characteristic of Hector’s dolphins, he was nicknamed ‘Harbour Hector’ by locals, who have been reporting sightings of him to the Department of Conservation since January.

Keen to find out if the dolphin was a member of the even rarer sub-species of Hector’s dolphin, the Māui dolphin, DOC sent its marine mammal expert Nadine Bott out into the harbour, with the biopsy tool she uses to take tissue samples from humpback whales during DOC’s annual Cook Strait Whale Survey.

“This little guy has been elusive but we were able to take a biopsy sample, which has confirmed that he is from the South Island population of Hector’s, of which there are only around 7000 in existence.” 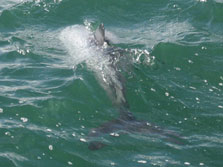 Taking a biopsy sample involves firing a small light-weight dart that hits the dolphin, bounces off and floats, retaining a small bit of tissue sample on the tip.

“It’s important that we take these samples to help us understand these vulnerable species better. It’s a safe technique for identifying marine mammals and doesn’t cause them any harm,” Ms Bott said.

The Hector’s dolphin is one of the smallest, rarest dolphins in the world, and the Māui dolphin is even rarer, with only around 110 living along the North Island’s west coast.

While this is the first live Hector’s dolphin ever recorded in Wellington Harbour, New Zealand has an interesting history of wild solitary dolphin visits. More famous examples include: Pelorus Jack a Risso’s dolphin known for escorting boats in the Cook Strait in the late 1800s; Opo, the Bottlenose dolphin in the Hokianga harbour in the 1950s, and more recently Moko the Bottlenose dolphin that has been visiting the Mahia peninsula since 2007.

While DOC hasn’t received any reports of sightings of ‘Harbour Hector’ since May, if you are lucky enough to spot him or any other marine mammals it is important to follow these simple rules:

A guide for responsible set netting can be obtained from your local Ministry of Fisheries office.

All seals, dolphins, whales and porpoises are fully protected under the Marine Mammals Protection Act 1978. Offences carry penalties of up to six months imprisonment or fines up to $250,000 and further fines of up to $10,000 for every marine mammal in respect of which the offence is committed. The rules are outlined in a brochure entitled 'Sharing our coasts with marine mammals' which can be obtained from DOC offices or downloaded from the marine mammals section of the DOC website.

Refer to the Marine Mammals Protection Regulations 1992 on the legislation.govt.nz website for a complete list of conditions prescribing behaviour around marine mammals.

Report sightings of Hector’s or Māui dolphin to DOC, preferably as soon as possible, by calling the 0800 DOCHOT line (0800 36 24 68). DOC needs to know the date, time and location of the sighting, the number of dolphins, whether there were any calves, and any other observations regarding their behaviour. If possible, take a photograph (from a camera or mobile phone) of the dolphins with a land feature in the background and a record of the GPS position of the sighting.

Hector’s dolphins have distinctive grey, white and black markings and a short snout. They are the only New Zealand dolphins with a rounded black dorsal fin. Dolphins are generally found close to shore travelling alone, or in groups or pods of several dolphins. They’re often seen in water less than 20 metres deep, but may also range further offshore. Females can be up to 1.7 meters long and weigh between 40-60 kilograms. Males are slightly smaller and lighter than females.