Endangered dotterels out of dog-box

Submissions to the Thames Coromandel District Council Draft Dog Control Bylaw by the DOC have resulted in a win-win situation for NZ dotterel on peninsula beaches this summer. 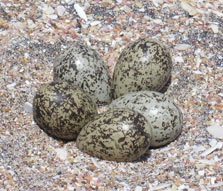 Submissions to the Thames Coromandel District Council Draft (TCDC) Dog Control Bylaw by the Department of Conservation (DOC)  have resulted in a win-win situation for NZ dotterel on peninsula beaches this summer.

The submission by the department, on behalf of the NZ Dotterel Watch Programme (NZDWP), means that some beaches on the peninsula have been given greater protection from dogs.

‘These beaches have been picked because they are areas we know people come to with dogs and often, people don’t have them under control.  We’re losing nests and chicks as a result – and that’s not acceptable’ says DOC manager Paul Gasson.

Last year NZ dotterel nests were damaged by uncontrolled dogs on beaches at Pauanui, Whangamata, Ohui and Opito, leading to the loss of chicks.  ‘Labour Weekend and it’s associated influx of beach goers unfortunately clashes with the timing of the first dotterel nests and chicks – if we can keep these early season nests safe then it bodes well for the NZ dotterel’s survival’ says Paul.

Extra provisions have been added to the Bylaw to extend the season that dogs must be on a lead, and additional areas at key beaches have been identified and named.

"The change to the Bylaw has come about as a result of a well thought out submission put together by DOC staff, as a result Council has agreed that additional protection needs to be put in place. The changes to the schedule will enable Council officers to enforce the bans in the designated areas" says TCDC's Environmental Services Manager Craig Birkett.

Both agencies are working together to develop signs about the new regulations, which came into effect on 21 September.  Information about the changes can also be found on TCDC’s website www.tcdc.govt.nz.