Dotterel season off to flying start

The breeding season for NZ dotterel on the Coromandel is underway and 24 chicks have fledged their nests already. This is slightly up on last year’s number of 22 for the same time.

The breeding season for NZ dotterel on the Coromandel is underway and 24 chicks have fledged their nests already. This is slightly up on last year’s number of 22 for the same time. 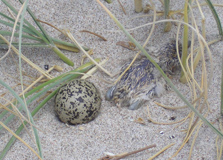 Dotterel nest at Opito with chick

The early season success has been attributed to fewer high tides in December, and the work of volunteer minders who had worked hard in moving or protecting nests before they were at risk.

‘Many nests were trenched or sandbagged and placed in tyres to protect them from being washed away – as a result only a few nests were lost’ reports Susan Bryant, the Department of Conservation’s (DOC’s) fulltime dotterel ranger.

Some NZ dotterel may re-nest over the next month, while for others it may have been their last attempt for this season. Most have only three or four nesting attempts during the season.

With the annual influx of holidaymakers about to begin on the Peninsula, Susan is urging visitors and locals alike to be aware of the new dog restrictions on beaches at Whangamata, Opoutere, Onemana, Whitianga and Pauanui.

‘There’s new signs up at the beaches, the information is on TCDC’s website, there’s being a number of articles in the paper about the changes - we’re asking that people be responsible and control their dogs - it does make a difference to these birds’ says Susan.

Seasonal rangers are also in place at Opoutere and Waikawau Bay on the Peninsula’s east coats, where the majority of birds nest. As well as monitoring the breeding season, these rangers carry out predator control by trapping, and provide information and advice to visitors to these beaches. This is all part of the NZ dotterel Watch programme, a unique partnership between DOC and Newmont Waihi Gold that began in 1995.

Find out more about NZ dotterel