Once again local Department of Conservation staff joined forces with colleagues from the Hawkes Bay at the very successful 16th Annual Sika Show in Taupo.

Once again local Department of Conservation staff joined forces with colleagues from the Hawkes Bay at the very successful 16th Annual Sika Show in Taupo. 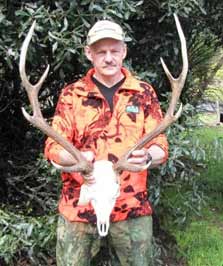 Staff were impressed by the response they got, enjoying the face to face discussions which ranged from hunting, huts, where the deer are concentrated, and the work the department does to help people get out there and put some venison on the BBQ. This is a great outcome for the department, as hunters are an essential tool in aiding the management of deer in Kaimanawa and Kaweka forest parks.

One of the best features of the weekend was the generally positive atmosphere the staff enjoyed, even when being confronted by the in-evitable 1080 questions. Many robust but cordial discussions took place, with the opportunity to present the department’s stance usually met with respect and a willingness to listen.

“We respect the fact that people don’t always support the work we do, and so it is good to be able discuss things without emotions getting out of hand’, say DOC Public Awareness officer Dave Conley. “All we set out to do is clear up a few misconceptions, so it is great to be able to talk frankly with hunters about hunting, which many of us enjoy as well”.

To keep the crowds of children involved DOC staff took on the not-so-subtle art of face-painting. Offering a choice of a stoat, rat or deer ensured a throng of vibrant “colourful critter” faces were visible throughout the show. Colouring competitions also helped to get children excited about Whio (blue duck). Under the theme “We’re not quackers!” a bunch of fun and whacky facts about blue duck were discussed with the children as their faces were painted. This fits nicely as hunters will come across Whio in many of the rivers in the Central North Island while out stalking deer, and this rare encounter can be a special part of the trip

Acknowledgements for a well run show must go to Mark Bridgman, who continues to build the show every year. A big weekend wrapped up with the prize giving, which featured prizes offered by DOC. A big thank-you to all our sponsors too, Lakeland Aviation, Helicopter Services, Smileez Kodak of Taupo and NZ Outdoor Magazine who helped make the show such a success. We will definitely be back!