DOC and local designers come up with home-grown 'kiwi-saver'

A ground-breaking, New Zealand-designed self-setting trap is about to enter the pest control battle – providing urgently-needed support for endangered birds such as kiwi.

A ground-breaking, New Zealand-designed self-setting trap is about to enter the pest control battle – providing urgently-needed support for endangered birds such as kiwi.

The ‘world first’ gas-fired trap – specifically targeting stoats and rats - has been produced by industrial design company ‘Goodnature’ with strong backing from the Department of Conservation (DOC). Its automatic resetting mechanism is expected to boost trap success and efficiency by up to 75 percent. 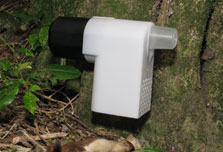 “Partnering with these young designers is delivering a cheaper, more effective trap on the frontline,” said DOC’s predator expert, Darren Peters. “For the same money we can get more traps, firing more often, out in the bush and that means we’re hitting those stoats and rats harder.”

“We know predators will kill up to nine out ten kiwi chicks born in the wild –– this multi-kill trap works smarter and that’s going to help protect a whole range of endangered birds.”

Controlling imported predators is a fulltime battle – DOC alone spends over $10 million a year on conventional trapping operations for stoats and rats.

“We were asked to take up a design challenge, so we sat down over a cup of coffee and thought up a hundred better ways to kill a rat,” said, Stu Barr from Goodnature. “The traps are fully recyclable and we’re confident we’ve come up with a simple, sustainable solution.”

The gas canister, which powers the self-setting trap, can kill up to twelve stoats or rats before it needs replacing. The benefits come from reduced labour costs as conventional traps have to be cleared and reset once a month – delivering a maximum of about twelve kills a year.

Stu Barr says work is already well underway on an advanced version of the self-setting trap specifically targeting possums and this is expected to be ready next year.

He says Goodnature is also talking to potential overseas buyers and expects the resetting trap system will appeal to the global grain and food storage industries.

The tree-mounted trap has a CO2 powered piston which is tripped when the target pest enters the trap. Instantaneously the head is crushed and the dead animal promptly falls to the ground as the trap resets. The trap is able to reset itself at least 12 times before a service is needed.  It is “baited” with a long-life meat derivative lure.

The trap is specifically designed to work with stoats and rats and will help to reduce labour costs compared to servicing a conventional kill trap.

A ‘DOC200’conventional trap checked 12 times a year over 20 years totals $1920. The costs for the re-setting device across the same timeframe are $320.

From August to October 2009, three small-scale trials will be held in the Orongorongo Valley, Fiordland and northern Te Urewera, which will compare it to the DOC series trap.