Didymo found in the Upper Rangitata

This find has disappointed Department of Conservation (DOC), Fish and Game and the local community. Despite there being infestations close by in the Rangitata Gorge, these upper sites had tested negative since regular didymo testing began two years ago.

The Peel Forest and Rangitata gorge community have put a huge effort into preventing didymo from spreading into these areas so far. 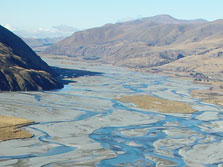 Sally Stephens of the Rangitata Gorge Landcare Group said; “this is very disappointing but not the end of the world. Despite didymo cells being present in the actual gorge for the last couple of years, we haven’t seen it bloom there. The fact that the river floods with the Norwest rain and remains dirty for long periods gives us reason to hope that we will not get the awful blooming found in other infected waterways. We still need to be vigilant and we still need to clean gear and jet boats before and after use in the Upper Rangitata.”

The Department of Conservation will carry out a delimitation survey to identify the extent of spread and will determine future management measures from the results of this survey. This could include providing more decontamination facilities.

Biodiversity programme manager Kennedy Lange said, “We still need to take whatever measures we can to prevent further spread, these are pristine waterways of international conservation value”.

The Upper Rangitata River is one of the most important braided river habitats nationally for specialist species such as the endangered black-fronted tern/tara and wrybill/ngutu porore and the endangered upland longjaw galaxiid (a native fish).

“These sites are especially critical at this time of year for breeding birds, and didymo could have severe impacts on the shallow feeding waters and the invertebrates that these species feed on,” said Mr Lange.

The Upper Rangitata is also a major recreational fishery and key salmon spawning tributaries are at risk.

“These spawning streams have been closed to fishing for the last two seasons.  Anglers are encouraged to continue to observe the Clean, Check, Dry practice so we may be able to prevent didymo spread from the main river into the upstream reaches and side stream habitats.”