Create your own garden lounge for lizards

For the price of a nasty weed, Wellingtonians can create a little luxury for lizards in their gardens during Conservation Week (September 13-20),

For the price of a nasty weed, Wellingtonians can create a little luxury for lizards in their gardens during Conservation Week (September 13-20),

Native plant “refuges” for lizards, and tips on providing them with a safe environment are on offer at a weed swap, being hosted by the Poneke Area of the Department of Conservation (DOC) in Wellington’s Civic Square on Saturday 19 September, between 1pm and 4 pm.

There will be an opportunity to discover the different kinds of lizards in their neighbourhood, and how to help other native animals, including planting an all-year-round food source for birds and building a weta motel in the garden. 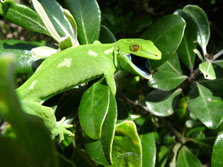 “We encourage people to get down and dirty in their backyards, dig up their worst weed, and swap it for a free native plant,” says Matt Barnett.

“Following a few simple steps they can then provide refuge, habitat and food for some of their local indigenous animals.”

“If you’re going to plant natives why not think about indulging some of our native animals at the same time?” says DOC biodiversity ranger Brent Tandy.

“Shrubby plants, grasses and flaxes can help lizards to hide and lizards and birds feed on the fruit of plants like Coprosmas and the nectar of flax.”

“Skulking moggies are a big threat to our skinks and geckos and providing an unkempt area in the garden with a pile of rocks or wood can help keep the predatory paws at bay.  Our cats are also preying on native birds so keeping them indoors as much as possible can help.

“The best advice we can give about cats is ‘don’t have one’ but if you do providing cover for lizards is a good idea.” 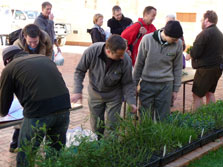 There are now more introduced plant species than native plant species in New Zealand and most of the invasive weeds endangering the ecosystems in our parks and reserves originated from peoples’ gardens.  Weeds are often dumped, or the seeds windblown or carried by birds.

DOC urges people to find out which weeds are potentially harmful and remove them before they get out control.

Not all weeds can be composted so if in doubt about how to dispose of them consult the DOC publication Plant me instead (available from the DOC’s Wellington Visitor Centre in Manners Street), phone your local council or DOC, or take them to your local green waste site.

Wellington City’s 5th Weed Swap is part of Conservation Week 2009 and has been organised by DOC with assistance from Wellington City and Greater Wellington Regional Councils, Forest and Bird, and Scouts New Zealand.