Illegal landings by yachts, one bringing a dog, marred an otherwise positive Labour weekend on predator-free Matiu/Somes Island in Wellington Harbour, by threatening the biosecurity of the island’s wildlife.

Illegal landings by yachts, one bringing a dog, marred an otherwise positive Labour weekend on predator-free Matiu/Somes Island in Wellington Harbour, by threatening the biosecurity of the island’s wildlife.

One group in a yacht moored on the decommissioned northern wharf and let a dog loose onto the island, and another landed and picnicked just 30 metres away from a large ‘no-landing’ sign”, island ranger Matt Sidaway said.

Rats and other introduced predators
threaten vulnerable native wildlife,
such as these fantail chicks

“Landings like this, which circumvent our biosecurity checks, can inadvertently bring rodents ashore, putting some of the scientific reserve’s already threatened plant and animal species under even greater pressure”.

Dogs are not permitted on the island because of the threat they pose to nesting seabirds and penguins, and other protected wildlife.

“This is one of the only places in Wellington where little blue penguins are safe from predators, and we’d like to keep it that way”.

Biosecurity measures for off-shore predator-free islands require the island staff to lay and monitor bait stations every time an illegal landing is reported. In the last year alone the two rangers have spent nearly 240 hours responding to boats or kayaks landing illegally around the island’s coastline. 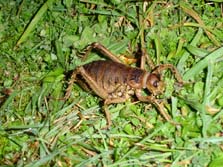 “Matiu/Somes is a great place to visit, whether by private boat or ferry, but we ask that people please respect it by landing at the main wharf area and carrying out the necessary checks for pest species,” said Mr Sidaway.

Kayakers can come ashore at the nearby beach on the northeast point of the island. But before exploring the island, all visitors must go through the whare kiore (rat house), where they are asked to check their belongings for pests, such as rats, mice, weeds, seeds and insects.

“The community has helped create a magic place out here putting in countless hours protecting and enhancing the island, including planting more than 100,000 native trees. By stopping pests in the whare kiore, at the island’s doorstep, we can ensure that rare flora and fauna such as the Brother’s Island tuatara, and the flourishing revegetation project can continue to thrive unhindered,” Mr Sidaway said.

A jewel in Wellington Harbour, the island hosts to up to 15,000 visitors a year, of which around 400 came ashore at the correct location near the island’s main wharf over the holiday weekend.

Boaties and visitors to the island are encouraged to let DOC staff know if they see an illegal landing on the island.

“Most people are fantastic and we rely on them to let us know if people are behaving inappropriately,” said Mr Sidaway.