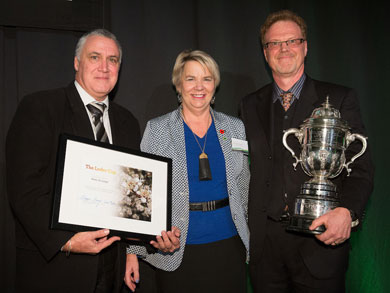 Prof. Peter de Lange has spent the last 25 years spearheading not only a superior threat-listing system involving vascular plants, but also extended his vision to lesser-known non-flowering plants such as ferns, mosses, liverworts and lichens.

Over the course of his career in botany he has co-ordinated and overseen the publication of six threat listings of the indigenous vascular flora. These listings have clearly prioritised the focus for conservation research and made a tangible difference to the protection of New Zealand’s indigenous flora.

Peter was the lead author behind the ‘Threatened Plants of New Zealand’ book in 2010. This book is a major landmark in New Zealand plant conservation and provides detailed description of 180 plant species considered threatened because of human activity.

A founding member of the NZ Threatened Plant Committee and a chair since 1999, Peter has driven and fine-tuned the criteria for the new threat system now used in New Zealand. The system is now being used by the Department of Conservation for all biotic groups in New Zealand. Better understanding of why something is threatened has led to better management of our Threatened and Uncommon plants.