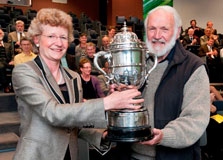 The Loder Cup was presented to Dr Colin Burrows in a special ceremony at Lincoln University on 22 October 2010 by the Minister of Conservation Hon Kate Wilkinson.

Dr Colin Burrows was awarded the prestigious Loder Cup for a catalogue of achievements including:

Minister of Conservation Hon Kate Wilkinson said in her press release: “This prestigious Cup is awarded for outstanding service and commitment to the protection of New Zealand’s native plant species. It is a fitting tribute to Dr Burrows.”

“He has had a long involvement and contribution to Canterbury’s natural history, particularly the South Island mountain environments. For over 50 years he has been inspiring others as a researcher, mentor and teacher, and as a role model for community conservation projects.” 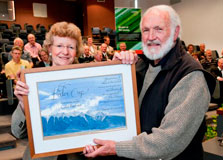 Dr Burrows was nominated for the award by the Lincoln University, supported by the Quail Island Ecological Restoration Trust.

In addition to his outstanding contribution of over 33 years to the education of New Zealand students as a teacher and supervisor, Dr Burrows was supervisor of the Cass Field Station (University of Canterbury).

He has been a member of Arthur’s Pass National Park Board 1968 - 1979; and on committees and as an advisor to various agencies and groups on key land areas, reserves, wetlands, lakes and coastal areas in the South Island. He was a member of the Beech Research Advisory Committee in the 1970s and took an active role in the save Manapouri Campaign at that time. He has been involved in a range of consultative work on various land areas, including Mount Cook National Park weed problems, and road works at Arthur’s Pass and Otira Gorge.

In addition to his nationally significant botanical work, Dr Burrows has volunteered much of his time to community groups. Over the last 13 years he has been a primary driver for the Quail Island Ecological Restoration Trust’s community eco-restoration project on Otamahua/Quail Island in Lyttelton Harbour, to restore the island’s indigenous flora and fauna. He has volunteered significant time to this community project as an ecological advisor and active worker, personally growing and planting many of the eco-sourced native species.

In 2008 he received the Environment Canterbury Natural Resource Management Award (individual Category) for his work on Quail Island.