Monitoring results demonstrate the urgent need for pest control and the effectiveness of aerial 1080.

We do pest control to protect New Zealand’s most vulnerable native species from rats, stoats and possums. We monitor native species carefully to make sure our pest-control efforts are effective.

We use a variety of methods, one of which is applying biodegradable 1080 by air over specified large areas of rugged terrain. Ground-based predator control methods also play an important part, but on their own, these tools have limited use in areas that are difficult to access, too large or too remote.

There are many ways we monitor species before and after pest control. Some of the most compelling results have come from comparison work: 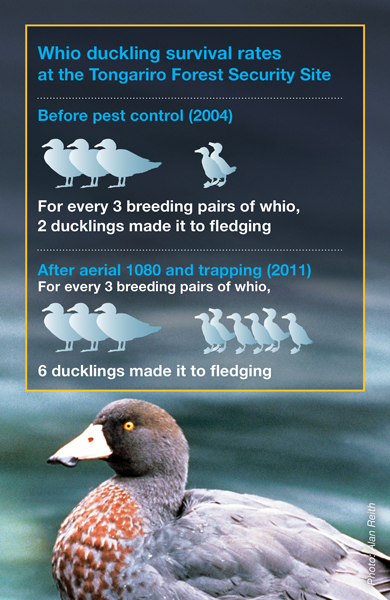 We’ve monitored more than 600 kiwi during and after 1080 operations over the last 10 or more years, and none has ever been killed by 1080.

Research published in 2019 shows use of 1080 leads to more kiwi chicks surviving.

In 25 years long-tailed bats have turned from decreasing at 5% to increasing by 4% per year.

Robins raised seven times more chicks after 1080 treatment than without.

Rock wren raised up to five times more chicks after 1080 treatment than without.

Thirty times more kākā chicks were produced in an area after 1080 treatment than in an area where no 1080 was used.

Mohua nests were twice as successful after 1080 treatment than without.

Save Our Iconic Kiwi

Kiwi populations around the country are declining at an average of about 2% a year – a serious situation. It’s mostly due to predation upon kiwi chicks by stoats, cats, dogs and ferrets. The goal for Save Our Iconic Kiwi is to turn this decline around, so that every type of kiwi is increasing.

In 2017, we started monitoring southern Fiordland tokoeka (kiwi) at Shy Lake, between Wet Jacket Arm and Breaksea Sound. The goal is to gather data before and after 1080 to ensure that we are controlling pests in large, remote areas of Fiordland in the most effective and efficient way to save the most kiwi.

In the absence of pest control, every chick we monitored was killed by a stoat.

Read about this work in our blog series, Fiordland Kiwi Diaries.

Thanks to more than 20 years of trapping and aerial 1080 treatment, native birds are flourishing in the remote South Westland valley.

Cameras capture mohua and other surprises

In 2014, scientists from DOC and Lincoln University used hidden cameras to spy on wildlife during an aerial 1080 pest control operation in the Blue Mountains, West Otago. The results were encouraging.