Native to some parts of Australia, the rainbow lorikeet was illegally released in Auckland in the 1990s. This dominant and prolific bird now poses a significant threat to our native wildlife. 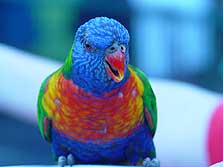 Native to some parts of Australia, the rainbow lorikeet was illegally released in Auckland in the 1990s. This dominant and prolific bird now poses a significant threat to our native wildlife.

The rainbow lorikeet (Trichoglossus haematodus) is an Unwanted Organism under the Biosecurity Act 1993, with an exemption for bird fanciers to hold and sell birds. Birds may still be kept as pets in secure aviaries and cages but it is illegal to release a rainbow lorikeet into the wild. People releasing them into the wild may face heavy penalties.

How did they arrive in New Zealand?

Rainbow lorikeets were introduced to New Zealand from Australia as cage birds. They are legally kept as pets in cages and aviaries throughout the country.

How did they get established?

Significant numbers of captive–reared birds were illegally and deliberately released in the Auckland area in the 1990s and had started breeding in the wild. By 1999 a feral population of 150–200 birds had established in the Auckland region, proving that they can survive and adapt to the New Zealand environment.

Native to some parts of Australia, this brightly coloured gregarious parrot feeds primarily on pollen, nectar and fruits, but will also feed on seeds. It is almost always seen in pairs or in flocks. Like most parrots they nest in hollow limbs or trunks of dead or living trees.

They are prolific breeders, with pairs known to rear as many as three successive broods in a single season thus enabling the population to increase rapidly.

Evidence shows that rainbow lorikeets compete with native birds by dominating their food sources and nesting sites. They are capable of dislodging much larger birds than themselves. They may also carry avian diseases which can threaten the health of native bird species.

Observations at suburban bird feeders near the original release site have confirmed that tūī formerly using these nectar feeders have been excluded by groups of rainbow lorikeets. While our native birds will generally defend these resources in singles, pairs or adopt a pecking order, rainbow lorikeets will descend on a food source in a flock and easily displace these species.

Rainbow lorikeets are strong flyers and have been recorded travelling over thirty kilometres between roosting sites and feeding grounds in Auckland. Because of this flying ability, they pose a significant threat to those species whose survival is only possible on island sanctuaries which have been cleared of predators.

As well as competing with the at-risk species, rainbow lorikeets could carry avian diseases (such as Psittacine Beak and Feather Disease which is widespread in captive parrots) to these populations, including some of our endangered native parrots.

Threats to our horticultural industry

Rainbow lorikeets can damage apples, grapes and other soft fruit, with the potential to significantly impact orchards and vineyards. They pose an economic threat to the commercial fruit growing industry.

The Department of Conservation began eradicating the feral population in 2000, concerned about competition with native honeyeaters and the possible threat to pristine island habitats such as Little Barrier Island.

MPI Biosecurity, in partnership with DOC and regional councils, now manages rainbow lorikeet under the National Interest Pest Response initiative. The aim of the response is to prevent rainbow lorikeets from establishing in the wild.

Escaped birds are caught using a range of methods including trapping and netting. The captured birds are returned to their owners where they can be identified or sent to commercial aviculturists with secure captive facilities.

Be a responsible owner

If you own a rainbow lorikeet you must be a responsible owner and keep it in secure caging. Advice is available from the DOC office on how to construct suitable caging that reduces the risk of the birds escaping.

Unwanted birds must not be released into the wild. They can be surrendered to bird rescue or the DOC office.

Within the greater Auckland area, DOC offers a service to rainbow lorikeet owners in getting their birds banded for identification at no cost. This allows them to be returned to their owners if they escape.

What do I do if I see a rainbow lorikeet?

If you hear of or see rainbow lorikeets in the wild please contact your regional council. Or, if you suspect a population has established, contact:

Biosecurity at the Ministry for Primary Industries
Freephone: 0800 80 99 66