Rudd are a voracious fish that compete with New Zealand's native fish and damage habitat. 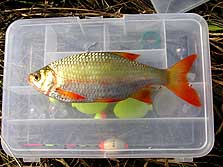 Rudd (Scardinius erythrophthalmus) is native to Europe, Russia and central Asia. The species was illegally introduced into New Zealand in 1967 via a private consignment of juvenile rudd which were then reared to adulthood and encouraged to breed.

The resulting fish were then deliberately and strategically introduced into a number of lakes and ponds in the Waikato.

Rudd have since been progressively spread illegally around lakes, ponds and rivers throughout the North Island as well as Canterbury and Nelson.

Rudd are stocky, deep bodied fish with distinctive red fins and large, shiny scales that range from silver (juveniles) to pale orange (adults) in colour. Rudd normally grow to about 25 cm, and about 500 g. They are highly productive, with females able to produce up to 50,000 eggs per kilogram of body weight.

What damage do they do?

Rudd prefer ponds, lakes and slow flowing streams. They are widespread in Auckland and Waikato with isolated populations in Northland, Whanganui, Wellington, Nelson and Christchurch.

Noxious species (except in Auckland/Waikato Fish and Game region where it is a sports fish).