Green slime and brown scum on stream beds is usually regarded as an unattractive nuisance however, it is a vital part of stream ecosystems. 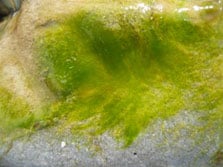 Algae are simple, aquatic, plant-like organisms that do not have true roots, stems and leaves. Many are single-celled so can only be seen using a microscope, while others grow in filaments or mats that are quite conspicuous. Algae have chlorophyll and can make their own food through the process of photosynthesis.

Although algal growths can often be seen in the water, a microscope is required to appreciate their beauty and complexity. Spirogyra under a microscope

Why are algae important?

Where are algae found?

Freshwater algae are found growing underwater on rocks and mud in streams and rivers. They are usually more abundant in slower streams than in fast flowing rivers. Didymo, the exotic pest alga commonly known as ‘rock snot’, is one of the few species that grow well in swift rivers. However, even didymo cannot withstand turbulent flood waters. 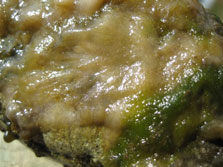 What types of freshwater algae are there?

Green algae: Green algae often look like strands of green hair flowing in the current. Spirogyra is a common green alga. Under a microscope its chloroplasts are clearly seen as spirals.

Red algae: Red algae, such as Audouinella, uses a different part of the light spectrum it is able to grow in places where the other algae can’t, so tends to be found in shaded places such as under rocks or banks.

Blue-green algae: The chlorophyll in the alga Cyanobacteria is not in chloroplasts but diffused throughout the cell. Pigments, other than chlorophyll, contribute to their colouration so cyanobacteria are not usually bright green. Nostoc is another cyanobacteria that is often conspicuous in streams.  It looks like bubbles of firm jelly attached to the rocks. The ‘bubbles’ are masses of small chains of cells. . 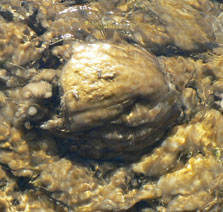 Diatoms: Mats of brown growth, fluffy masses or slimy layers on rocks are some of the ways diatoms appear to the naked eye. Gomphoneis forms thick, glistening, light-brownish mats on river substances and is often mistaken for didymo. However, didymo has much larger cells and grows in tougher, more fibrous mats.

Can algae be bad?

Biosecurity helps to prevent damage caused by unwanted organisms. These include animal pests, weeds, didymo, and diseases like kauri dieback.