New Zealand has an unusually high number of fern species for a temperate country and about 40 per cent of these species occur nowhere else in the world.

Ferns are mostly a tropical group, and New Zealand has an unusually high number of species for a temperate country. We have about 200 species, ranging from 10 m high tree ferns to filmy ferns just 20 mm long. About 40% of these species occur nowhere else in the world. 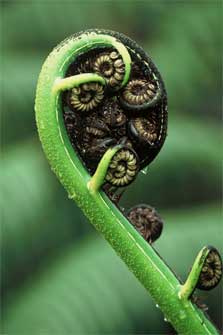 Where do they grow?

Ferns are typically found in moist, forested areas because they require lots of water. Ferns are abundant in all damp situations in New Zealand forests, forming the undergrowth beneath a dense canopy of evergreen trees. They are also found growing on tree trunks and branches and along stream banks. Some hardy species have adapted to other drier habitats such as coastal, alpine, urban and even desert locations.

Tree ferns are some of the most distinctive features of our forests. They occur in all forest types and are most plentiful in cut-over and degraded forests, where light levels are relatively high. They also appear in older plantations of exotic trees that are relatively open.

Ferns have two distinct life cycle stages, one of which is dependent on water.

The fern plant with which we are familiar usually grows on land; it represents the asexual generation (called a ‘sporophyte’) and bears spores on mature fronds. Each spore is capable of producing a new plant, but of a different form.

Once released, the spore grows into a small, thread-like or heart-shaped structure that grows close to the ground. This structure is the sexual generation called the ‘gametophyte’ because it possesses the egg and sperm (or gametes). The gametophyte releases sperm cells that must land in water in order to survive and travel to the female egg cells.

When a sperm has fused with an egg cell, the fertilised egg produces a new plant – this time the sporophyte generation. Thus ferns are said to have ‘alternating generations’ because each new generation of ferns that is produced will be a different form from the previous generation.

Because most ferns require damp, humid forest environments, they are easily damaged when forest conditions change – for example when the canopy is disturbed or when forest edges are created, thereby increasing sunlight and drying winds.

Use this resource to experience native trees in your school grounds or another local green space.