Dactylanthus (Dactylanthus taylorii) is a highly unusual plant, and holds a special place in New Zealand's indigenous flora as the only fully parasitic flowering plant and the southern most member of its mainly tropical family.

This fascinating plant grows as a root-like stem attached to the root of a host tree. In response to dactylanthus, the host root moulds into the shape of a fluted wooden rose, which gives the plant its previous common name of wood rose. It is through this placenta-like attachment that dactylanthus draws all its nutrients.

The Maori name for dactylanthus is "pua o te reinga," meaning 'flower of the underworld,' and alludes to the way its flowers emerge from below ground.

Dactylanthus is currently regarded as being in serious decline. A Department of Conservation Recovery Plan is in action. 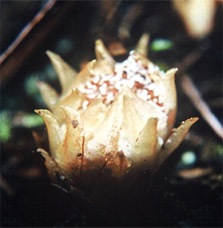 Dactylanthus occurs in widely scattered sites. It prefers damp but well drained places, and is often found growing at the head of small streams. It lives where trees form a dense, leafy canopy and the ground is well covered in tall forest, or marginal shrub land. It is normally found on flat sites, but is sometimes found on vertical rock faces where roots are exposed.

Since dactylanthus grows underground it is impossible to know the number of plants that exist. However, the distribution and number of plants has declined recently, and there are likely to be only a few thousand remaining.

Dactylanthus has always been a difficult plant to find, and has never been considered common. Dactylanthus is found from Northland to Wairarapa, with the largest populations in East Cape and the central plateau. There is also a small population on Little Barrier Island.

Unfortunately collectors are still digging up the plant, but the practice is discouraged and seems to be declining.

Threats to this very special plant and the reasons for its decline include:

Possum browsing on flowers and preventing seed set is the greatest long-term threat to dactylanthus. Attempts to protect dactylanthus flowers by controlling possum numbers have had limited success.

Protecting the plant from possums with simple cages or exclosures has proved effective in allowing the plants to flower and produce seeds. Hand pollination also increases seed set.

On a positive note, dactylanthus plants flower profusely, which means a large supply of seeds for dispersal if flowers are pollinated.

Recent work has shown that dactylanthus can be established at a new site by spreading seed under a suitable host.

The original Department of Conservation Dactylanthus taylorii Recovery Plan was approved in 1995. This plan set in place a series of steps that promoted the recovery of Dactylanthus. It also outlined different management options, and a work plan.

This plan was reviewed in August 2001. The review provided a direction for future management. A revised plan was published in 2005.

The vision of this plan is: 'Dactylanthus is secure throughout its natural range. Dactylanthus is locally abundant in self-sustaining populations. Key ecosystem interactions such as those with pollinators, dispersers, consumers and hosts are restored.'

The long term (50 years) goal is to have at least 15 populations with over 500 clumps in each, including 100 females.

Report any new sightings of dactylanthus to your nearest DOC office. Other than in the eastern Cape area most known populations have some plants caged or tagged with a small metal tag, so if the plants aren't caged or tagged, contact DOC.

Report plants on sale or being dug up

Let us know about any fresh wood roses that are being offered for sale, e.g. at travelling fairs, curio shops, or on the internet. Also get in touch if you spot anybody actually digging plants up.

DOC welcomes any comments or suggestions you may have about the conservation of Dactylanthus. Contact any DOC office.