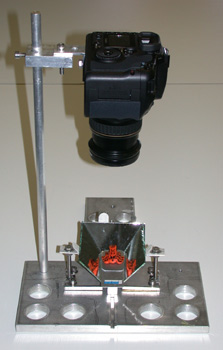 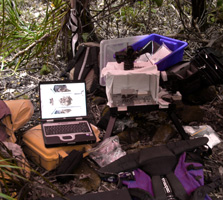 Photo stage in the field

Identifying individuals allows us to monitor the frogs and determine what factors are leading to the decline of this highly endangered species.

In the past, toe-clipping was used to identify individuals, but this technique may have potential risks for the frogs.

The photo stage is less invasive as it uses natural markings on the frog’s skin to identify individuals and allows scientists to collect information with minimal handling time.

Before the photo stage was developed, the technique of using photographs of natural markings to identify individual frogs was trialled by photographing 45 Archey's frogs from different sides.

The photographs showed individuals had unique markings, and that by examining the markings from several sides of each frog, efficient and accurate identification of individuals was possible.

A photo stage for the field

After the success of the trials, DOC contracted a University of Waikato engineering student to design a compact, portable photo stage, suitable for use in the field. It uses mirrors to obtain images of the front, back and sides of the frog in a single digital photograph.

Additional information about the frog, such as size and skin condition (used for disease surveillance), can also be collected from the photographs. Now in its second, further improved design, the photo stage is used to monitor two Archey's frog populations.