Maud Island frog, previously thought to be a separate species, is now considered the same species as Hamilton’s frog.

Our frogs are unique

They are small, nocturnal and hard to see as they camouflage themselves well. Two of our species, Archey's and Hamilton's frog, live on land in shady, moist forested areas, and the Horchstetter's frog is semi-aquatic, living on stream edges.

New Zealand's native frogs have several distinctive features that make them very different from frogs elsewhere in the world:

Archey’s and Hamilton’s frog don't have a tadpole stage. The embryo develops inside an egg, and then hatches as an almost fully formed frog. Parents then care for their young – for example, the male Archey's frog may carry his young offspring around on his back.

Hochstetter’s frog, which is semi-aquatic, does have a tadpole-like stage and the embryos can swim after hatching. 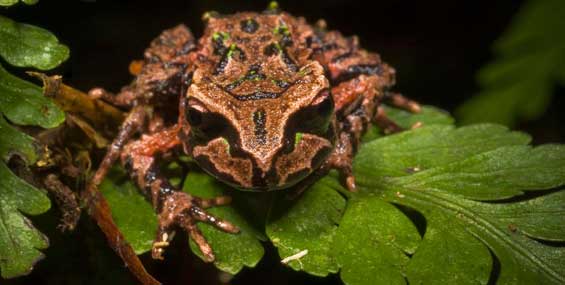 The semi-aquatic Hochstetter's frog is the most widespread native frog. It has been sighted at Waipu in the upper North Island, on Great Barrier Island, and in the Coromandel, Waikato, central North Island and Raukumara Ranges. 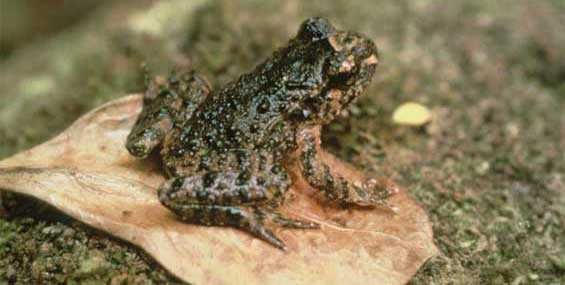 Hamilton's frog (Leiopelma hamiltoni) is one of the world's most endangered frogs. Fossil records show it was once spread from Waikato to Punakaiki. Now it survives only on offshore islands, with just two natural populations remaining – on Takapourewa/Stephens Island in the Cook Strait and Maud Island in the Marlborough Sounds. It is carefully managed by DOC.

The formerly named Maud Island frog is now considered genetically similar enough to Hamilton’s frog to be the same species. The populations of this species on Maud Island and Takapourewa/Stephens Island are likely to have been separated since before people arrived in Aotearoa New Zealand and will continue to be managed as separate populations.

DOC has created a second population of the Takapourewa/Stephens Island frog lineage on Nukuwaiata Island.

These translocations were undertaken as insurance against a disaster such as fire, disease or a predator incursion, which could wipe out the sole surviving population lineages on Takapourewa/Stephens Island and/or Maud Island. 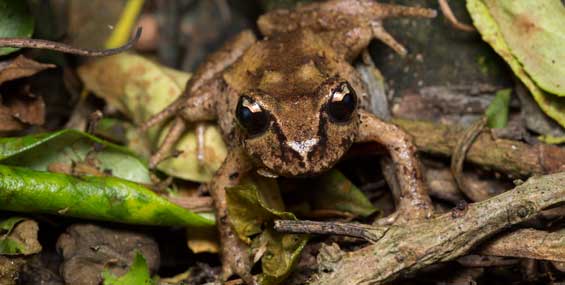 Frogs are becoming more endangered everywhere in the world. More than most creatures, frogs are sensitive to disease, pollution, chemicals and environmental changes, as they absorb many things through their sensitive skin.

Fossil records show that our native frogs were spread throughout the North and South Islands several thousand years ago. The three remaining native species have declined significantly in range and numbers over the past 1,000 to 2,000 years, as land has been cleared of forest and predators have been introduced.

Frogs are vulnerable to introduced predators such as rats, mice, pigs, stoats and cats.

Over the past 25 years, amphibian populations have declined throughout the world and disease is considered to play a key role.

Amphibian chytrid fungus is a major threat to frogs worldwide. The fungus has been confirmed in introduced frog populations all over New Zealand and in native frog populations on the Coromandel Peninsula and Whareorino Forest.

The fungus relies on damp conditions to survive and to spread. It can be spread from frog-to-frog contact or through contact with infected soil and water. People can spread the amphibian chytrid fungus by moving soil and water around on their boots, gaiters, equipment and vehicles. Animals can also spread it.

DOC has a Frog Recovery Group that provides expert advice to managers and external parties on management and research into native frogs to help with their conservation.

DOC manages island biosecurity to keep predators off islands that Hamilton’s frogs are found on and undertakes monitoring of Hamilton’s frog island populations along with external researchers and iwi.

We are investigating the impacts of introduced predators on frogs, and methods for frog monitoring and translocation are being developed and improved. Frog distribution and their numbers are also being documented.

Avoid touching native frogs because you may damage their sensitive skin. If you have a permit to touch them, follow all instructions and protocols provided in your permit.

You can avoid spreading the amphibian chytrid fungus by not visiting areas where native frogs are found.

If you need to visit native frog habitat, you must ensure all your footwear, gaiters and equipment are clean and disinfected – check with the local DOC Office for further instructions and guidance.

As native frogs are small, well-camouflaged and nocturnal, they are hard to find. You can assist DOC greatly by reporting any sightings of native (and introduced) frogs to DOC’s Herpetofauna Database, also known as the atlas of the amphibians and reptiles of New Zealand.

Record the location, type of habitat (stream edge, forest floor), time and date you sighted them and, if possible, take photographs.

When photographing a frog to identify whether it is a native frog, try to take a clear photo of the side of the frog including its head. Introduced frogs have an eardrum on the side of their head (a circular structure) that is absent in native frogs.

DOC is also interested in records of introduced frogs as populations may transmit disease, or directly compete or predate native frogs.