Sperm whales are one of the easiest whales to identify at sea. These animals are widespread around the world, but have a patchy distribution.

Sperm whales (Physeter macrocephalus) have wrinkly skin and a large rather square head that makes up around one third of their body length. Females are smaller than males and have a proportionately smaller head.

They are purplish-brown or dark grey in colour, with white underneath. The dorsal fin has been reduced to a low hump and there is only one, slit-like blowhole, situated on the top left side of the snout.

Their angled, bushy blows make them easy to spot even though they rarely show much more above the surface.

These animals are widespread around the world, but have a patchy distribution. They prefer deep water (>200m) and so are usually found offshore and in areas with submarine canyons, such as Kaikoura, where sperm whales are present all year round.

They generally move towards the poles in summer, males more so than females and juveniles. Females usually inhabit water deeper than 1000 m at latitudes less than 40-50°. Male distribution extends to more temperate latitudes.

Kaikoura is home to the main New Zealand population of sperm whales, including both resident and transient individuals. It appears that there is no other area in the world where this species is routinely found so close to the coast (Dawson et al., 1996). In any one season there are around 85 sperm whales present here, most of which are likely to be male (Dawson et al., 1996). 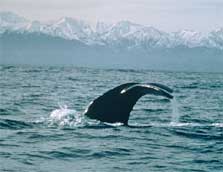 Sperm whales are toothed whales and dive to great depths to feed. They eat large organisms, mainly squids, but males are also likely to eat demersal fish including sharks and rays. They are thought to feed using clicks, which can both locate and possibly stun their prey. Dives have been known to last for over one hour and can be deeper than 1000 m. Most dives tend to last around 35 minutes however, extending down to 400 m.

Sperm whale being cut up at whaling station, 1975. Sperm whales were one of the most heavily exploited of all the world’s whales

Killer whales have been seen attacking sperm whales, but usually unsuccessfully. Pilot whales are also known to harass them. Other potential predators of younger animals include large sharks. When confronted with predators individuals are known to cluster together into defensive formations.

These whales were one of the most heavily exploited of all the world’s whales, although they are still relatively abundant. Present day threats include entanglement in fishing gear and collision with ships.

Studies on the effects of tourism on sperm whales have found them to react negatively to rapid approaches by vessels, sudden changes in speed and close approaches (MacGibbon, 1991). Whales respond by spending less time at the surface, and so tourism has an impact on their normal behaviour.

DOC undertakes management and monitoring of Kaikoura whale-watching operations in an attempt to mitigate the effects of tourism on this species. 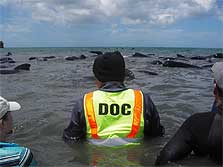 Douglas Anderson (DOC) attending
to a pod of stranded whales 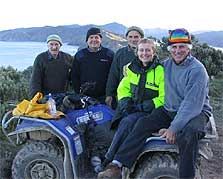 Ex-whalers who participated in a
whale survey