Despite their name, pilot whales are in fact one of the largest members of the dolphin family.

There are two species of pilot whales – long finned and short finned. If you have sighted one in New Zealand’s waters it is almost certainly a long finned pilot whale. They roam throughout the cold temperate waters of the Southern Ocean.

Short finned pilot whales tend to inhabit more sub-tropical and tropical zones. Although the two species are readily distinguishable by differences in tooth count, flipper length, and skull morphology, it is almost impossible to distinguish between the two species at sea.

Pilot whales are in fact one of the largest members of the dolphin family, but they are treated as whales for the Marine Mammals Protection Regulations 1992. They were named pilot whales because it was thought that each pod followed a ‘pilot’ in the group.

Pilot whales are dark gray, with a lighter "saddle" shape behind the fin, light gray to white streaks behind the eyes, and a light gray patch on the chest. Their dorsal fins are sloping and rounded rather like the shape of a breaking wave.

Probably pilot whales' main distinguishing characteristic is their large bulbous forehead, which protrudes beyond the mouth and small-to-non-existent beak.

The Southern Hemisphere long finned pilot whale ranges throughout the Southern Ocean, but the abundance of the population is not well understood. A second sub species inhabits the North Atlantic.

Pilot whales prefer areas which are topographically "steep" (high relief), such as submerged banks and the edge of the continental shelf.

It's thought that this preference for steep landforms may partially explain their tendency to strand – their sonar may not function so well in the shallow, gently sloping underwater environments that are typical of high-stranding areas such as Golden Bay. 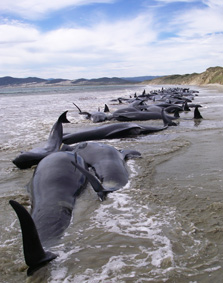 Pilot whales live in stable family groups, and offspring of both sexes stay in their mother's pod throughout their lives.

Males will spend brief periods of time (a few months) with another pod while mating, usually in spring or summer, and a visiting male can father a number of calves.

Each pod numbers 20-100 whales, though they can congregate in much larger numbers.

Females can live to about 60 years, and males 35-45 years. Pregnant long-finned pilot whales have been recorded up to 55 years old. Interestingly, although females only calve until 35 years old, they can continue to lactate until 50.

Long-finned pilot whales in New Zealand waters eat mainly arrow squid and common octopus, both of which are commercially harvested in New Zealand.

Most scientists believe that individual whales strand because they are diseased and coming to the end of their natural lifespan. Mass strandings are more contentious, and there are numerous theories.

The most likely hypothesis is that pilot whales' echolocation is not well-suited to shallow, gently sloping waters, because they generally prefer high relief (steep) areas such as the edge of the continental shelf. This would also explain why most mass strandings happen in summer, when the whales follow popular food sources inshore.

Another theory points to pilot whales' highly sociable behaviour – when one whale loses its way and strands, its pod mates may swim to its aid.

A theory that parasites affecting the nervous systems of pilot whales may be responsible for mass strandings is not well supported. 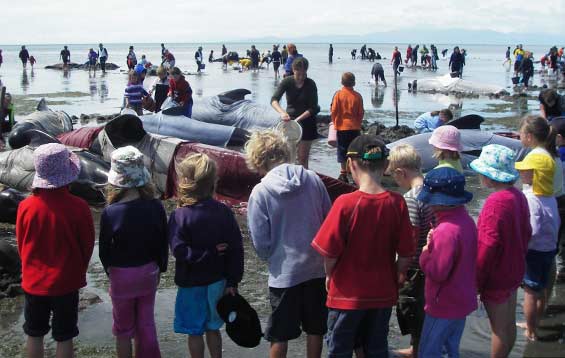 Find out why whales and dolphin strand, the stages involved in a stranding response, and how you can help.