Because Māui dolphin are found close inshore, their habitat overlaps with many coastal activities that people take part in. Activities such as boating and fishing can pose a threat to their survival. The effects of littering and pollution are also an issue. 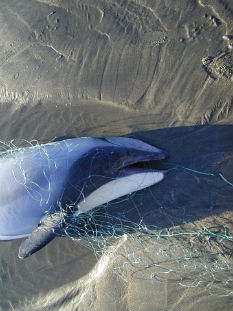 It's up to us to minimise these threats to ensure Māui dolphins are conserved for future generations.

Māui dolphins mostly live within a few miles of the coast and occasionally venture into some harbours, which can result in an overlap with commercial and amateur fisheries.

A significant number of Māui dolphins have died through accidental entanglement in nets. Set net fishing is likely the largest source of human caused Māui dolphin mortality. This has prompted a series of set net restrictions where Māui dolphins live.

While we have no records of Māui dolphins being caught in trawls, there have been incidents of Hector’s dolphins being caught in trawl nets. Some restrictions also apply to trawling to reduce the risk of this happening. Drift nets are now banned from the lower reaches of the Waikato as the nets were sometimes lost and floated out to sea where they had the potential to catch the dolphins.

Organochlorines are found in pesticides and some building materials, and reach Māui dolphin habitat via coastal runoff. Organochlorines are known to affect the breeding success of some marine mammal species, in some cases resulting in sterility. They may also suppress their immune system. Recent research shows that while Māui and Hector’s dolphins have high levels of organochlorines, none of the samples tested had levels that would likely cause the sort of problems mentioned above.

Metals such as mercury, lead and cadmium, which have little or no recorded biological function, enter the environment through human activities. They don’t break down, and accumulate over time.

These metals are often toxic even at low concentrations. Data on the effects of metal toxicity in cetacean species is sparse, and the risk from metal toxicity is unquantified for Māui dolphins.

The extraction and transportation of crude oil poses a potential threat for Māui dolphins. Polycyclic aromatic hydrocarbons, such as those found in oil and gas, have been linked to cancers in some species of marine mammals. The risk from these compounds is unquantified for Māui dolphin.

They may also incur cuts, wounds and infections from the debris. Plastic ingestion could also pose a threat to the dolphins. The risk is unquantified for Māui dolphins.

As a coastal species, Māui dolphin may be exposed to a range of pathogens that end up in the sea from farm run-off, through sewer outfalls or shipping, and through direct or indirect contact with other marine species. There has been evidence of Toxoplasma gondii related deaths to Māui dolphin and Brucellosis, causing abortion in both sub-species.

While there may be an anthropogenic source for some pathogens, the exact origin of Toxoplasmosis and Brucella is not confirmed. See natural threats.

Further research is required to better understand the impacts of these diseases on Māui dolphins and how any impacts can be avoided.

Interactions with boats and tourism

Vessel traffic (for example, recreational boating or commercial vessels) can potentially disturb or strike Māui dolphins. There is a record of one Māui dolphin beachcast at Bethells Beach with old scars from a propeller strike.

Although single encounters with a boat or a group of swimmers are unlikely to cause major disturbance for Māui dolphin, the ongoing effects of multiple and extended encounters with dolphin watching operations could be harmful.

Long-term effects of encounters may include reductions in breeding success, feeding activity, and resting opportunities. Eventually, dolphins may also leave certain areas to avoid disturbance. The effects of tourism on marine mammals are well understood and have been studied in many dolphin species, including Hector’s dolphins around Banks Peninsula.

Coastal works and development create noise, potentially masking sounds Māui dolphins use for communication and navigation. They may also introduce pollution into the environment.  These activities may displace the dolphins from important habitat and make it harder for Māui dolphins to hunt and successfully produce offspring.

Seabed mining, drilling, and exploration, including seismic testing, is likely to have an impact on Māui dolphins. Potential impacts include:

It is very difficult to establish links between seismic tests and dolphin mortality. The information currently available is inadequate to allow any conclusions to be drawn about threats posed by offshore mining, beyond suggesting that a potential for adverse impacts exists.

Potential impacts of seismic surveying on Māui dolphins are managed using the 2013 Code of Conduct for Minimising Acoustic Disturbance to Marine Mammals from Seismic Survey Operations.

Research on Māui dolphins can potentially generate a threat to the dolphins themselves. This could include tagging (including satellite or other transmitters), taking biopsy samples, or through harassment. Permits and/or approvals are required to undertake research and will not be issued if the research presents undue risks to the dolphins.