Dusky dolphins have virtually no beak, and their dorsal fin is not hooked and rather blunt.

They are a bluish-black colour on the back and tail and white on the underside of the body.

Dusky dolphins (Lagenorhynchus obscurus) are confined to the southern hemisphere in temperate and subantarctic waters between around 26°S and 55°N.

They have been recorded as far south as Campbell Island and east out to the Chatham Islands, with main populations occurring in Kaikoura and Admiralty Bay in the Marlborough Sounds.

Large groups of several hundred to over 1000 dusky dolphins are present in Kaikoura all year round with individuals moving north to feed at Admiralty in winter months.

Due to their coastal nature, populations of dusky dolphins around the world are discontinuous and reproductively isolated. Large-scale migrations are known to occur in New Zealand however, and inshore-offshore movements are made both diurnally and seasonally with dolphins moving further offshore in winter. 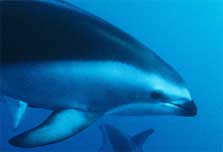 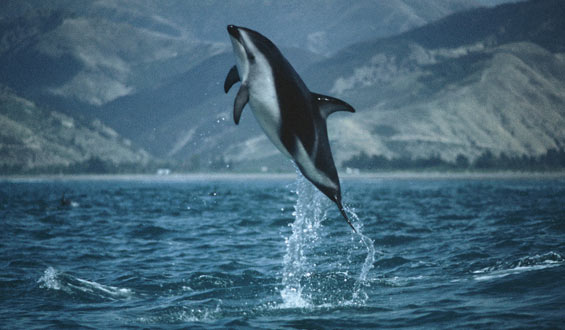 Dusky dolphin leaping out of the water

The diet of this species is dominated by anchovies, hake and several squid species. A variety of other small fish species is also eaten. In Kaikoura, dusky dolphins typically feed at night on prey associated with the deep scattering layer.

Individuals are known to adapt foraging methods to habitat and prey availability patterns, with the same dolphins, identified by natural markings, being found feeding cooperatively during the day in the Marlborough Sounds. Admiralty Bay is used regularly by 200-300 dolphins as a winter foraging habitat.

Surface feeding activities occur in large groups accompanied by extensive aerial display and acrobatics, which are believed to help synchronize cooperative foraging. Cooperative foraging can also be seen between dusky dolphins and other marine mammals such as New Zealand fur seals.

Sexual maturity is reached at approximately 7-8 years. Calving in New Zealand occurs from November to mid-January. Gestation lasts for around 13 months and weaning occurs in less than 3 years. Dusky dolphins are estimated to live to ages of 30 years or more.

Video of a newborn dusky dolphin

Killer whales and some shark species are the only confirmed predators of dusky dolphins. In order to avoid killer whales, dusky dolphins will move into shallower water and swim closer together.

Unknown numbers of dusky dolphins are caught in set nets in New Zealand waters each year. Current catches appear to have decreased from those of the 1970s and 1980s however.

Possible future expansion of aquaculture at Admiralty Bay is likely to have an impact on dusky dolphin populations through habitat fragmentation and competition for food resources.

Our work with dusky dolphin

We are currently focusing its management for this species on mitigating the impacts of tourism at Kaikoura. We are also responsible for managing stranding events.

You can report sightings of dolphins to our conservation hotline 0800 DOCHOT (0800 362 468). You can also report a sighting online.

Reports of sightings are always valuable and help increase our knowledge of dolphin distribution and movements around New Zealand.

If you need help identifying species, download the marine mammal sighting form (PDF, 416K) (Word, 4,300K). You can use the images and descriptions to find out which species of dolphin you observed. 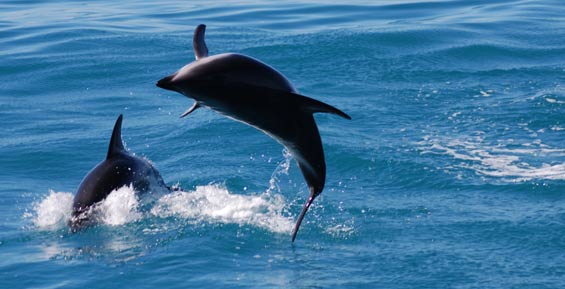