Moko was a male dolphin that visited the coastline around Mahia and the Bay of Plenty.

Moko was a male solitary dolphin that frequently visited the coastline around Mahia Peninsula, Gisborne, and Whakatane between March 2007 and June 2010.

He attracted much attention from locals and visitors who were delighted by close encounters with the animal.

After a brief appearance at Mount Maunganui, Moko disappeared. On 8 July 2010 Moko was found dead on Matakana Island in the Bay of Plenty. Following a post mortem at Massey University, Moko's remains were returned to Matakana Island and buried on 17 July 2010.

Autopsy results from Massey University have ruled out boatstrike or drowning as cause of death. Despite some traces of liver disease, the ultimate cause of death was not found, and will remain a mystery. 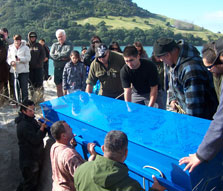 DOC staff and people from Ngati Awa watch as Moko is buried by tangata whenua.

DOC's policy when a deceased marine mammal is washed ashore is to work with tangata whenua to identify and follow the most appropriate protocols and processes.

In Moko's case, Ngai Te Rangi from Matakana indicated that a burial on the island was appropriate.

The burial was attended by representatives from Ngati Awa in Whakatane, who were assisted by DOC to take the body to Matakana.

An exchange of sands was agreed to with Mahia iwi, to be included in their commemorations and the erection of a memorial at Mahia.