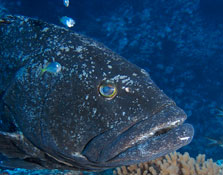 In New Zealand the largest and possibly only breeding population is found in the Kermadec Islands Marine Reserve. Around mainland New Zealand spotted black grouper are relatively common on shallow reefs at Three Kings Islands and along Northland’s rocky east coast. Small juveniles have been recorded as far south as Hokitika on the west coast, and Palliser Bay in the east.

Spotted black grouper inhabit rocky reefs in estuaries and on the open coast to at least 50 m depth. They are replaced in deepwater by the hapuku, bass and the eightbar grouper (Epinephelus octofasciatus). They are highly territorial and may inhabit the same piece of reef for life. At the Kermadec Islands small juvenile spotted black grouper are found in large intertidal rock pools as well as amongst boulders at 20 to 30 m depth.

Very little is known about any aspect of the biology of spotted black grouper. They appear to be slow growing. In Australia estuarine habitats appear to be important nursery habitats for juveniles. Small fish are mostly females but they change sex to become males around 100 to110 cm in length. Social factors potentially controlling growth and sex change are unknown. Reproductive behaviour is unknown. 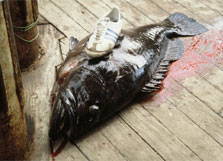 Spotted black grouper are vulnerable to a variety of fishing methods due to their large size, territorial behaviour and natural curiosity.

Populations in eastern Australia are considered to be overfished and their estuarine nursery habitats are threatened by coastal development and pollution. As a consequence of their vulnerability spotted black grouper have been protected throughout their Australian range, as well as in New Zealand.

Spotted black grouper are classified as Near Threatened by the IUCN Red List of Threatened Species.

Any offence under this Act is liable to a fine of up to $250,000 and six months imprisonment.

It is not illegal to accidentally catch a spotted black grouper but it must be released alive and unharmed. Report the catch to the DOC and/or Ministry of Primary Industries as soon as possible. DOC may request dead specimens be landed for scientific research.

Trade in any part of a spotted black grouper is illegal.

Fishers and divers should familiarise themselves with the identification of protected marine fishes. If you are a spearfisher do not spear any grouper you can not positively identify.

Spotted black groupers may suffer internal damage from hooks and over-expansion of their swim bladder if caught by accident. Handle the fish carefully, keeping it in the water if possible; carefully remove the hook or cut the trace if it is deeply hooked; if possible use a small hook through the lip or a fin and weighted line to drop the fish back to the bottom if its swim bladder has blown.

As very little is known of the biology of spotted black grouper dead specimens are of considerable scientific value. Should you inadvertently kill a spotted black grouper please notify DOC immediately. You may be requested to return the specimen to shore if this is practical. Useful information to provide with the specimen includes the location and depth that the fish was taken in.