Found in tropical and warm temperate seas, the spine-tailed devil ray is a regular visitor to waters off the northern North Island.

Spine-tailed devil ray (Mobula japanica) migrate to the waters around northern New Zealand annually during spring and summer. They are superficially very similar to manta rays (Manta species) and are often misidentified as mantas.

As their appearance suggests they are closely related to the manta rays (Manta birostris, M. alfredi) and are generally grouped with them in the sub-family Mobulinae. Members of this subfamily are often collectively referred to as mobulid rays or just mobulids.

The spine-tailed devil ray (Mobula japanica) can be distinguished from the giant manta (M. birostris) species by its:

M. thurstoni has a white tip to the dorsal fin similar to M. japanica but the spiracle is sub-circular and located below the leading edge of the disc, and the outer half of the underside of the wing is silver with a large dark blotch near the posterior margin (pure white in M. japanica). 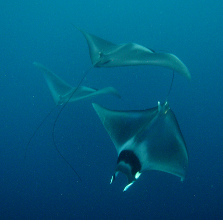 The spine-tailed devil ray is probably found worldwide in tropical and warm temperate waters. It is reported to at least 38oS off the east and west coasts of the North Island.

Devil rays are pelagic, occurring in shallow water close to shore as well as in the open ocean.

In New Zealand waters this species is usually encountered at or near the surface in the open ocean beyond the edge of the continental shelf (deeper than 200 m). Tuna spotter plane pilots report it is one of the most abundant large pelagic species encountered offshore during summer.

In subtropical and tropical regions this species is usually found in shallow coastal waters. In the Gulf of California it is regularly caught in bottom-set gill nets and has been observed feeding close to shore in water less than 1 m deep.

It is not known where the spine-tailed devil rays observed off northern New Zealand originate from. Their movements may be similar to those of skipjack tuna, with which they are often associated.

There is no information on population trends in New Zealand waters. Fishery data suggests this is probably the most abundant mobulid ray in the western Central Pacific and Indo-Pacific regions.

Spine-tailed devil rays feed mainly on krill (euphausiids), but will also eat copepods, hyperiid amphipods, crustacean larvae and small fishes. Seasonal movements in the southern Gulf of California (subtropics) appear to be related to the abundance of krill.

Little is known of the biology of spine-tailed devil rays in New Zealand waters. In the southern Gulf of California males tend to dominate during spring, and females dominate over the summer. No sex segregation has been observed, however segregation by size does occur. In the Gulf of California birth occurs in the spring, with mating occurring in late spring and summer on the feeding grounds.

Devil rays are commonly seen in small groups off northern New Zealand but there are occasional reports of spectacular aggregations numbering several hundred individuals being seen off Northland. This species frequently leaps clear of water. 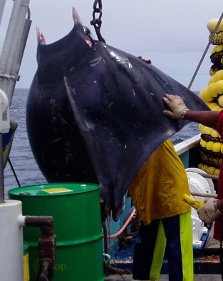 Spine-tailed devil ray are taken in a directed set net and harpoon fishery in the southern Gulf of California and as by-catch in tuna purse seine and set net fisheries for skipjack tuna.

They are also occasionally taken on tuna longlines.

The biological significance of fishery mortality is unknown but the size of the reported catch in some countries and their very low fecundity is cause for concern.

They have not been commercially or recreationally fished in New Zealand waters but are a by-catch in the skipjack tuna purse seine fishery. Many devil rays taken in this fishery are released alive but their survival rate is unknown, as is the level of mortality occurring in the nets.

Spine-tailed devil rays are classified as Near Threatened globally and Vulnerable throughout Southeast Asia by the IUCN Red List of Threatened Species. 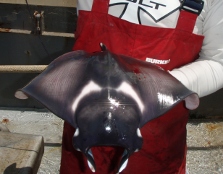 Spine-tailed devil rays are protected under the Wildlife Act 1953. This means it is illegal to hunt, kill or harm devil rays within New Zealand’s Territorial Sea and Exclusive Economic Zone (200 nm limit around New Zealand).

Any offence under this Act is liable to a fine of up to $250,000 and six months imprisonment.

It is not illegal to accidentally catch a spine-tailed devil ray but it must be released alive and unharmed.

Report the catch to the Department of Conservation and/or Ministry of Fisheries as soon as possible. DOC may request that dead devil rays be landed for identification and scientific research.

Trade in any part of a devil ray is illegal.

Do not buy manta or devil ray products when travelling overseas (the skin is used for leather and the dried cartilage filter plates from the gills are used in traditional Chinese medicine).

When operating a boat around devil rays try to minimize the disturbance and risk to the animals by travelling slowly and quietly, not obstructing their movements or cutting through a school, and avoiding load noises or sudden movements that may startle them.

As very little is known of the biology of spine-tailed devil rays dead specimens are of considerable scientific value. Should you inadvertently kill a devil ray please notify the Department of Conservation immediately.

You may be requested to return the specimen to shore if this is practical. Useful information to provide with the specimen includes the location and depth that the fish was taken in.