The oceanic whitetip shark is a large highly migratory species that is most abundant in tropical regions of the world's oceans.

This species is reported to reach 3.9 m in total length, although specimens more than 3 m in length are exceptional. One of the characteristics of oceanic whitetip sharks is their large, very broad and rounded first dorsal and pectoral fin.

There has been a substantial decline in abundance of oceanic whitetip sharks linked to overfishing. The species is protected within the Territorial Sea and New Zealand Fisheries waters. 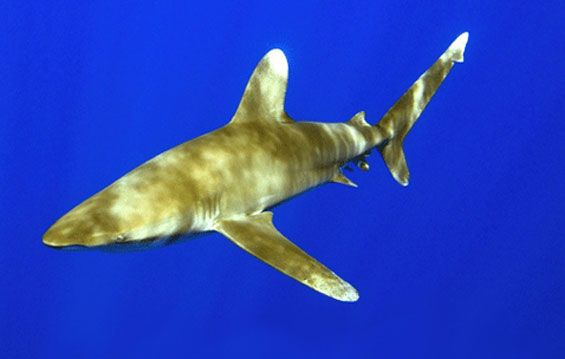 The oceanic whitetip shark (Carcharhinus longimanus) has a circumglobal distribution in tropical to warm-temperate oceanic waters. Although it may be encountered over continental and insular shelves, it is most abundant well away from land.

Oceanic whitetip sharks are infrequently recorded from northern New Zealand, and have been recently protected within the Territorial Sea and New Zealand Fisheries waters.

Oceanic whitetip sharks are one of the most widespread sharks. They occur in all tropical to warm-temperate waters but are most abundant in oceanic waters between about 30° N and 35° S. 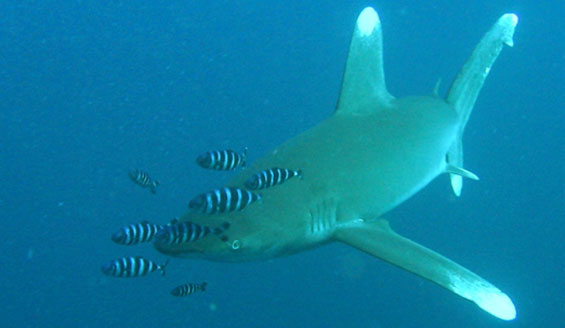 This species was once considered to be among the most abundant sharks in the oceans, being recorded almost everywhere in waters greater than 180 m depth and warmer than 20° C.

However, there has been a substantial decline in abundance linked to overfishing, and these sharks are now only occasionally sighted and recorded. The IUCN classifies the oceanic whitetip as "Vulnerable" in the Red List of Threatened species. The species status in New Zealand waters is unclear due to a lack of scientific observations. Fisheries catch data suggest that it is rare but levels of non-reporting and misidentification are unknown. 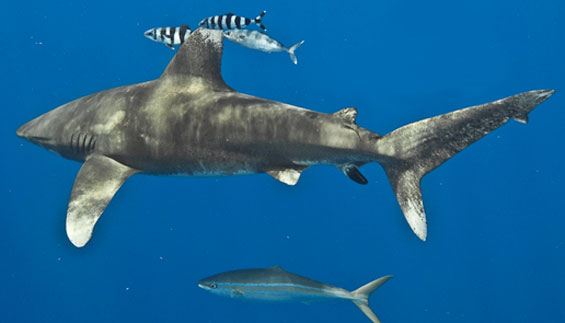 Oceanic whitetips are characterised by their large, very broad and rounded first dorsal and pectoral fins; a prominent ridge of thickened skin between the dorsal fins; a conspicuous pre-caudal pit at the origin of the upper lobe of the tail; and upper lobe of the tail much longer than lower lobe. The upper teeth are serrated and broadly triangular.

The maximum reported size is 3.9 m in total length but individuals more than 3 m in length are considered exceptional. The maximum length reported from the Southern Hemisphere is about 2.7 m.

About 50 years ago, these sharks occurred in such large numbers that they were considered a threat to the sustainability of commercial longline fisheries. More recently they are barely mentioned in scientific papers and fishing reports.

This spectacular decline in abundance has been due to both directed and incidental catch in commercial fisheries. Commercial landing of this species has grown rapidly due to the demand for their fins. Their broad fins are highly valued for use in shark fin soup.

Catch rates of oceanic whitetip sharks in tropical waters were recently estimated to have declined by 17% (Confidence Interval 14% to 20%) per year from 1995 to 2010. This decline has also been associated with a significant decrease in average size.

Oceanic whitetip shark have been fully protected in our waters under the Wildlife Act 1978 (Wildlife (Oceanic Whitetip Shark) Order 2012) since 3 January 2013.

Prohibitions on retention, transshipment, and landing of oceanic whitetip sharks have also been adopted by the following regional fisheries management organisations (RFMOs):

Fishers are reminded that for this and all other protected species: