Although historically abundant in some waters around New Zealand, the basking shark, the second largest fish in the world, is showing signs of decline. Basking sharks are the second largest fish in the world, with some reports estimating their maximum size at more than 12 m long.

New Zealand appears to be the species’ centre of abundance in the southern hemisphere, with historical reports of aggregations containing hundreds of these giant filter-feeders from the waters off Kaikoura and Bank’s Peninsula.

Basking sharks (Cetorhinus maximus) are members of the order Lamniformes, which also contains:

They are not closely related to the other giant filter-feeding shark the whale shark (Rhincodon typus). Basking sharks are found worldwide in cool temperate waters. In New Zealand they occur from the Kermadec to Auckland Islands but are most abundant south of about 39oS.

Large seasonal aggregations of basking sharks have historically been reported off Kaikoura and Canterbury (Pegasus Bay and Canterbury Bight), and catch rates in trawls are highest off Bank’s Peninsula, northwest of the Auckland Islands and in the Hokitika Canyon.

Basking sharks are pelagic filter-feeders. They are generally encountered on the surface inshore during the spring and summer, when they readily enter shallow water close to the surf zone and may even enter brackish coastal lagoons such as Lake Ellesmere/Waihora.

Coastal regions favoured by basking sharks are generally those that exhibit high planktonic productivity. At other times of the year basking sharks are found offshore in deep water over the upper continental slope and oceanic banks.

Occasional mid-ocean captures and strandings on subtropical and tropical oceanic islands have been reported and were thought to be extralimital but recent satellite tagging of basking sharks in the Northwest Atlantic has shown that they undertake deepwater migrations to tropical regions, remaining between 300 m and 1000 m depth, below the warm surface waters and that they may even cross the equator during these migrations.

Satellite tagging suggests they may have a preference for water temperatures between 15 and 17·5 C.

However, recent research suggests that a ratio of 0.45 is more appropriate for large sharks, meaning the global population could be little more than 18,200 basking sharks. The same genetic study found no evidence of separate North Atlantic and Pacific (New Zealand) basking shark populations but the sample sizes available from both regions were relatively small.

The estimated total number of basking sharks caught between 1994–95 and 2007–08 in the three New Zealand trawl fisheries that have the highest basking shark by-catch is 922 (c.v.19%). Estimated catch peaked in 1997–98 and has steadily declined to low numbers. However as the predicted encounter (strike) rate shows little trend this decline may be explained by the large decline in fishing effort in these fisheries.

Basking shark diet consists of zooplankton (small planktonic animals), mainly calanoid copepods. They feed by slowing swimming through dense concentrations of zooplankton with their mouth wide open. Expansion of the gill arches opens the gills and erects the gill rakers which sieve the plankton from the water.

A 7 m basking shark swimming at 2 knots has been estimated to filter 1484 cubic metres of seawater per hour. As might be expected, the appearance of surface schools of large (>3 m total length) basking sharks is strongly positively correlated with zooplankton density.

Few details of the life history of basking sharks are known. Current estimates of size at maturity for males are 5-7 m total length, and 8.1-9 m for females. Males are estimated to be 12-16 years old at maturity, and females about 20 years old. Maximum age is unknown but is probably similar to that of other lamniforme sharks (i.e. 30-60 years).

Size at birth is estimated to be 1.5-2 m total length. The only information on litter size is a report of a 6 pups found in a female taken off Norway in August 1936.  The gestation period is unknown; one estimate suggests it may be as long as 3.5 years.

Maximum accurately measured total length is 8.8 m, with reliable visual estimates to 9.1 m. There are unconfirmed reports of basking sharks 12.2 m total length. Individuals between 3.5-10.4 m have been reported from New Zealand waters however most are less than 8 m total length.

Estimated weight of the 8.8 m specimen was 4541 kg. This estimate was later revised to 6000-7000 kg but a global summary of large basking shark lengths and weights by Henry Mollet indicates the original estimate was probably correct. Mollet lists two 11 m total length sharks with weights estimated between 6200 kg and 6350 kg. The major threats to basking sharks are directed fisheries and incidental bycatch in commercial and artisanal (traditional or small scale) fisheries.

During the 1950s the British Columbian population was the subject of an eradication program run by the Canadian Fisheries Department in response to commercial fishers’ complaints that basking sharks were causing too much damage to their nets.

In Japan and China they continue to be taken for oil, fish meal and fins.

In New Zealand incidental mortality of basking sharks occurs in gill net fisheries for rig and school shark, and in middle-depth and deepwater trawl fisheries for barracuda, squid and hoki.

All directed basking shark fisheries have shown a similar pattern of high initial catches followed by depletion of the stock and long-term closure. Most depleted populations have exhibited very long recovery times (several decades) or no discernable recovery.

If accurate the low estimated effective population size of basking sharks potentially makes them susceptible to the fixation of deleterious genes and loss of adaptive genetic variation (evolutionary potential), two factors that could negatively affect the species’ long-term survival.

The potential effects of global climate change on the distribution and abundance of basking sharks are unknown.

Basking sharks are classified as Vulnerable globally, and Endangered in the Northeast Atlantic and North Pacific by the IUCN Red List of Threatened Species.

Basking sharks are protected under the Wildlife Act 1953. This means it is illegal to hunt, kill or harm basking sharks within New Zealand’s Territorial Sea and Exclusive Economic Zone (200 nm limit around New Zealand).

Any offence under this Act is liable to a fine of up to $250,000 and six months imprisonment. Basking sharks are also protected from fishing by New Zealand vessels operating on the High Seas under the Fisheries Act 1996.

International trade in basking shark products is regulated under the International Convention on Trade in Endangered Species (CITES). The Department of Conservation (DOC) is New Zealand’s CITES agency and collaborates with other government agencies, including Customs and the Police to ensure that New Zealand’s obligations under the convention are met.

Basking sharks are listed on Appendix II of the convention meaning a non-detriment finding and export permit are required from the country of origin. DOC issues export permits for CITES listed species but protection under the Wildlife Act means all trade in basking shark products in New Zealand is illegal.

DOC scientists conduct research on the distribution and biology of basking sharks in New Zealand waters, and the department contracts research related to fisheries interactions through the Conservation Services Programme.

It is not illegal to accidentally catch a basking shark but it must be released alive and unharmed. Report the catch to DOC and/or Ministry of Fisheries as soon as possible. DOC may request that dead sharks be landed for scientific research.

Do not buy basking shark products when travelling overseas.

When operating a boat around basking sharks, try to minimize the disturbance and risk to the animals by travelling slowly and quietly, not obstructing their movements or cutting through the school, and avoiding load noises or sudden movements that may startle them.

If swimming with basking sharks, do not obstruct their movements or attempt to touch or ride on them. Swim slowly with as little noise as possible, do not swim directly at them.

As very little is known of the biology of basking dead specimens are of considerable scientific value. Should you inadvertently kill a basking shark please notify the Department of Conservation immediately.

You may be requested to return the specimen to shore if this is practical. Useful information to provide with the specimen includes the location and depth that the fish was taken in. 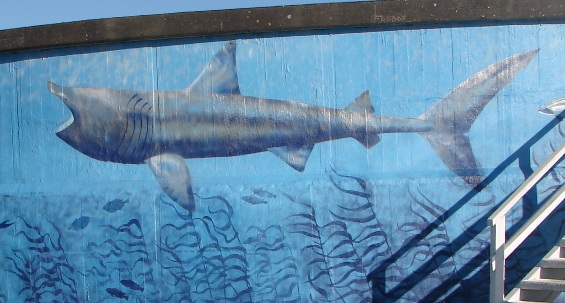