The whitehead/pōpokotea has a series of clear tuneful calls that fill the forest with a pleasant cacophony of sound when they appear in flocks high in the canopy of the forest. 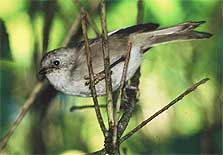 Whitehead/pōpokotea (Mohoua albicilla) are widespread and locally common in North Island beech forests, podocarp forest and old growth exotic plantation forests. However their range has shrunk since European settlement and they have disappeared from places such as Northland.

The birds are around 15cm long and have black beaks and eyes. Males have white heads and underparts, and pale brown upperparts, wings and tail. Females and juveniles are similar, but have brown on their nape and tops of their head.

In summer, chattering flocks of these ‘bush canaries’ can be heard as the juvenile birds do their teenage thing. 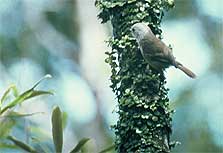 Unlike their South Island cousins the yellowhead or mōhua, the whitehead is not a hole-nester which has probably helped it better survive the onslaught of introduced pests.

Forest clearance, once a threat, is luckily now a thing of the past.

Whitehead/pōpokotea are not threatened, so DOC doesn't have specific work programme for them. 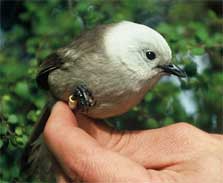 Of course the work that DOC does in plant and animal pest control increases the quality of whole ecosystems. This ongoing work contributes to the success of many common birds, as well as giving our rarer more susceptible species better chances of survival.

DOC priorotises its work to protect the rarer species, in the context of their overall environment.