The white heron has always been rare in New Zealand and it has gained almost mythical status.

It is revered by both Māori and pakeha for its elegant white feathers. This graceful bird has long, slender legs and a long, thin S-shaped neck, which has a distinct kink when flying.

The kōtuku is common in Australia, the South Pacific and Asia.

In New Zealand it only breeds near Whataroa, South Westland, between September and January. This colony is in the Waitangiroto Nature Reserve and guided jet boat tours take visitors to view the birds from an observation hide.

During the breeding season time, the birds feed in the large coastal lagoons in the area, particularly the nearby Ōkārito Lagoon.

After breeding, the birds disperse widely and may be seen at coastal freshwater wetlands or estuaries throughout the country. 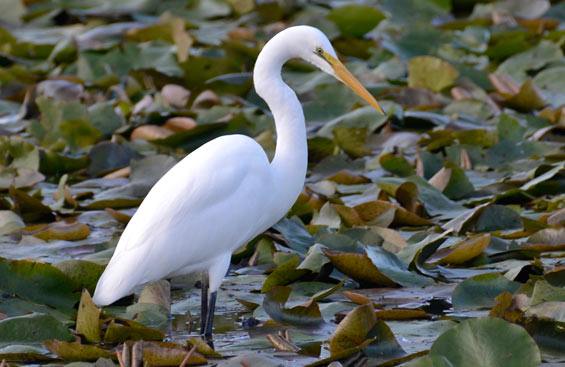 Because of its rarity in New Zealand and its beautiful plumage, the kōtuku was highly valued by Māori and European settlers for its ornamental feathers. The species was almost exterminated to satisfy the demand after its only breeding site on the Waitangiroto River was discovered in 1865.

By 1941 there were only four nests. At this time, the Waitangiroto site was declared a reserve and wildlife refuge and patrolled at breeding time. The managed access helps ensure the birds have every opportunity to nest undisturbed. The numbers have now stabilised with a permanent population of around 100 to 120 birds.

The white heron has always been rare in New Zealand. Why the kōtuku has not colonised a wider breeding ground is a mystery, but the current population is stable, although it experiences year-to-year fluctuations in breeding success.

Natural variables, such as storms hitting during the early part of the nesting season and the condition of the nearby Okarito Lagoon, are significant factors in determining breeding success. The kōtuku requires shallow water for feeding, and this habitat can severely reduce in certain years when the outlet of the lagoon gets blocked. The damming of the lagoon may also disrupt the migration of whitebait, which is a major food source for kōtuku.

The kōtuku colony is situated in extremely close proximity to a shag rookery and a Royal Spoonbill colony. The success of any of these three species may place pressure on the relative success of the other two.

Predators like stoats, possums and harrier hawks may threaten breeding success at various times, and control programmes are in place for both stoats and possums.

Monitoring of the nesting colony has been undertaken annually since 1944 to provide information on the health of the population over time. Currently the concessionaire that runs ecotours to the sanctuary undertakes this monitoring work on behalf of DOC.

The monitoring methodology measures what is happening with several key population parameters. It consists of recording the number of adults, nests, chicks, and fledglings present in the colony. Recordings are taken from September, when the birds arrive, to about March, when chicks fledge and birds leave.

In addition to kōtuku, the numbers and breeding success of royal spoonbills and little shags are also monitored.

The kōtuku is dear to the hearts of many New Zealanders with its beautiful white plumage and elegant silhouette. The only place it breeds is at the Waitangiroto Nature Reserve on the West Coast

Ōkārito is a coastal settlement bounded by ocean, estuary, sea cliffs, lush forest and unsurpassed views of the Southern Alps. This small village is now home to around 30 permanent residents, but it was once a gold mining boom town.