The Westland petrel (tāiko) is endemic to New Zealand and breeds only on the West Coast of the South Island. 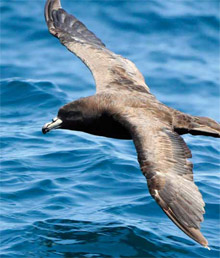 The survival of the Westland petrel/tāiko has great significance as these birds are the last remnant of a unique ecosystem.

They are one of the few petrel species that remain on the mainland of New Zealand and inhabit much of the same breeding range on the West Coast of the South island as they did before humans arrived.

Numerous species of burrowing petrels once bred in coastal and inland areas of both the North and South Islands. However, depredation by humans, changes to the habitat and predation by introduced mammals such as stoats, cats, dogs, pigs and rats have been responsible for the almost complete removal of petrels from the mainland.

Fortunately the large size and aggressive nature of Westland petrels allows them to more successfully defend themselves and their chicks against most predators, enabling them to survive where other petrel species have been lost.

It ranges widely in search of food but concentrates on the hoki fisheries of the West Coast and Cook Strait.

The tāiko (Procellaria westlandica) was discovered as recently as 1945, when pupils of Barrytown School north of Greymouth found the distinctive blackish brown bird with an ivory beak and black feet while doing a school project. Staff from the National Museum (now the Museum of New Zealand Te Papa Tongarewa) and the Wildlife Service (now the Department of Conservation) began studying the tāiko to collect information on:

Since the programme began in 1969, thousands of birds have been banded in order to monitor breeding success and survival rates.

The Westland petrel differs from other petrels that breed in New Zealand in being a winter breeder, with its only breeding location confined to an 8 km stretch of coastal forest in the foothills of the Paparoa range near Punakaiki.

Westland petrel numbers have been estimated in recent years by DOC and other researchers and there are around 4,000 breeding pairs annually at the breeding sites.

Tāiko, like other species of their type, begin to breed at 6–7 years old, but may return to the breeding site as young as 3 years old. Adults live for 25 years on average, which is a very long time for an animal in the wild.

Threats to the Westland petrel include dogs, cats, pigs, goats, stoats and rats as well as power lines, and exposed lighting and loud noises near their flight paths. Land modification for farming in the coastal foothills may also have reduced habitat suitable for petrels.

DOC works with Te Papa seabird researchers, local residents and landowners, Forest and Bird and the Grey District Council to learn more about the species and the best ways to address threats.

Activities include surveillance of colonies to detect the presence of pests such as pigs, controlling feral goats, maintaining boundary fences and providing advice to visitors and residents.

When chicks are fledging in October and November, DOC staff can be needed to rescue chicks on the ground (due to lack of wind or being confused by strong lighting), which are at risk of being harmed.

Punakaiki, on the West Coast of the South Island has New Zealand’s only mainland Westland petrel breeding colony. Watch this video to find out what’s special about Westland petrels.