Learn about why we need to manage the takahē population and potential reasons why the Takahē Recovery Programme carry out transfers.

Currently only 1/3 of the takahē population is located in the wild, the rest are living in small groups across 18 secure island and mainland sanctuaries around the country.

Because of this, the takahē outside of the Murchison Mountains are managed as one large meta-population (several small populations of the same species) and require intensive management via transferring birds to ensure the population remains functional.

The logic behind takahē transfers The Takahē Recovery Programme orchestrates the movements of many takahē each year, generally before and after the breeding season.

This operation of "musical takahē" is driven by decisions to ensure that the breeding potential of the population is optimised. This includes ensuring genetic mixing is enhanced across the population and ensuring that each breeding pair are the best match they can be.

Birds' condition, marital status and each breeding pairs' success is continually reviewed and factored into the transfer schedule.

The Takahē Recovery Programme is in the business of making more takahē and aims to do this as efficiently as possible - every takahē transfer is planned and carried out with this aim in mind.

Takahē come of breeding age around 3 years old but as takahē are social by nature, they will pair up from a young age. The Programme ensures all single birds will have the company of at least one other bird.

Takahē who have lost mates will pair up again and sometimes birds will trade in their mates for a better model, leaving their previous mate in need of a new partner. The Programme will ensure these gaps are filled.

Unfortunately some takahē are unable to successfully breed or are nearing the end of their reproductive life. To ensure that prime breeding habitat is made available to more productive pairs these birds will be moved to live out their days as takahē ambassadors in display sites. These birds provide great advocacy opportunity for the public to see a takahē.

In order to preserve and promote genetic diversity within the takahē population, breeding with close relatives is not encouraged.

The genetic heritage of all birds (with the exception of some wild birds) is known and the Takahē Rangers safegaurd against inbreeding by ensuring birds of similar family lines are not paired.

Takahē are very territorial and will aggressively defend their breeding habitat, sometimes resulting in deaths of individuals. Takahē can defend a territory from 5 - 60ha, depending on the quality of the habitat. A single (unmated) bird may pose a threat and cause disruption to a pair's breeding success and will need to be removed from the area if problems persist.

Two is company, three (or more) is a crowd

Some takahē are happy to live in breeding groups, which may attempt to incubate multiple females' eggs. Currently with an excess of females within the secure sites population there are some trios present. Whenever two males end up in a breeding group attempts are made to split them off to ensure better productivity.

This island ain't big enough for all of us

Unfortunately the secure island and mainland sanctuaries that hold takahē are limited by size and available habitat and cannot house growing takahē population numbers. As these takahē breed the offspring will be transferred to either fill a gap in the meta-population or be released into the wild. Some of the sanctuaries are experiencing regeneration of native bush which means suitable takahē habitat is growing smaller and therefore sites cannot maintain as many breeding pairs as they previously could.

Sometimes a bird just needs a change of scene, perhaps a new mate, some R&R and fattening up. On occasion birds will be brought down to the Burwood Takahē Centre, kept a close eye on and when their condition has improved they may be transferred off to a new home.

If there is a threat (eg. predator invasion) that is not manageable in the short term the Takahē Recovery Programme will remove birds from sites if the risk is considered to high. 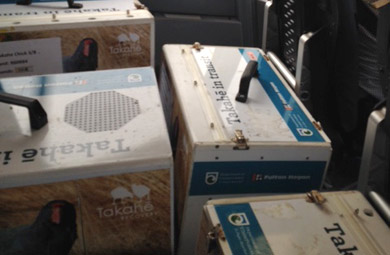 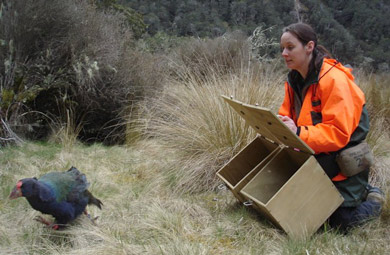 Burwood Takahē Centre: the hub of the Takahē Recovery Programme

The Burwood Takahē Centre, established in 1985, is the Programme's largest secure breeding site and the only site within the historic range of the South Island takahē.

If there is space or birds are in need of a mate these will be sourced from the wider meta-population and transferred to Burwood to ensure the engine of the breeding programme is running at full capacity.

Eleven young birds produced from the 2016/2017 breeding season were recently transferred to Burwood from a number of sites, including Cape Sanctuary, Oroknoui, Mana Island and the Te Anau Bird Sanctuary. These juveniles have been successfully fostered on to resident Burwood pairs, who have accepted the new additions to their family and will teach them valuable wild foraging skills. Adults from secure sites outside of Burwood will not know how to feed on tussock without being taught, which is an intensive process, therefore it is easier to teach the juveniles by fostering to Burwood.

Is the meta-population the solution?

The island and mainland sanctuary sites provide habitat for a security population outside of the sole wild population, representing the genetic diversity of the takahē population. Many of the sites are successfully contributing to the recovery of the takahē and the Programme would not be seeing the current successes without the dedication of these sites and their supporters. However in many cases the breeding productivity is considerably less than that within the Burwood Takahē Centre or the Murchison Mountains population.

Managing the small takahē groups as a meta-population to ensure the recovery of the species continues requires intensive management and continual intervention. This translates into a large and costly task.

While the secure sites play an important role in the short to medium term recovery of the species - the longer term recovery goals are "to secure large self-sustaining wild populations of takahē in areas of their former South Island range".

The Recovery Programme is currently completing feasibility studies on potential new recovery sites, as the Murchison Mountains is close to reaching carrying capacity. A new site needs to be established to house the growing population and establish a self-sustaining population, which the Murchison Mountains is not capable of being at present. As the Recovery Programme hones in on a new site to reintroduce a takahē popoulation into the wild, the team must carefully choose which groups of birds will make up the optimal founding population - and so the "musical takahē" operation continues...