The silvereye – also known as the wax-eye, or sometimes white eye – is a small and friendly olive green forest bird with white rings around its eyes.

Silvereye (Zosterops lateralis) were self introduced in the 1800s and now have a wide distribution throughout New Zealand. They have made the forest their home and are now among the most common bird in suburbia too.

The silvereye has a wide distribution throughout New Zealand. They can be found from sea level to above the tree line but they are not abundant in deep forest or open grassland.

Slightly smaller than a sparrow, the silvereye is olive-green with a ring of white feathers around the eye.

Males have slightly brighter plumage than females. They have a fine tapered bill and a brush tipped tongue like the tui and bellbird.

The silvereye was first recorded in New Zealand in 1832 and since there is no evidence that it was artificially introduced, it is classified as a native species. Its Māori name, tauhou, means 'stranger' or more literally 'new arrival'. 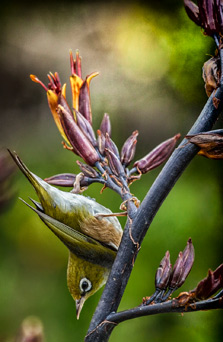 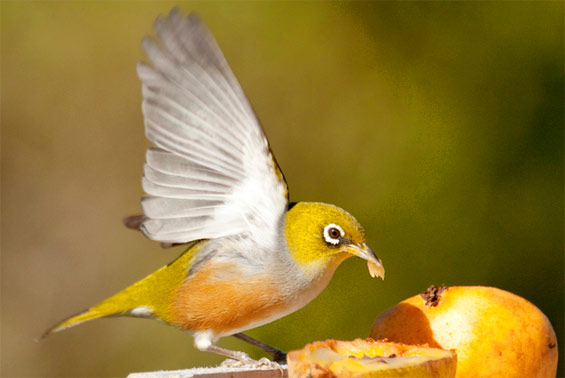 Cats, rats and stoats are as great an enemy to silvereye as they are to other native birds.

Silvereye are not threatened, so DOC doesn't have specific work programme for them.

Of course the work that DOC does in plant and animal pest control increases the quality of whole ecosystems, and therefore contributes to the ongoing success of many common birds, such as the silvereye, as well as ensuring the ongoing survival of our rarer more susceptible species.

DOC priorotises its work to protect the rarer species, in the context of their overall environment. This is encapsulated in the whakatauki (Maori Proverb):