The pūkeko is probably one of the most recognised native birds in New Zealand with its distinctive colourings and habit of feeding on the ground.

Pūkeko are a member of the rail family of birds. They look very similar to takahē, although takahē are much heavier. Pūkeko are about 51 centimetres long with distinctive colourings; a deep blue colour, with a black head and upperparts, white feathers under their tail, and a red bill and legs.

Pūkeko are widespread and are as at home in pasture and farmland as they are in wetlands. They are commonly seen along marshy roadsides and low-lying open country.

Unlike many other native birds, the pūkeko has adapted well to new habitats, such as grassed paddocks, croplands and even city parks, a necessity brought about by disappearing wetlands. However, the pūkeko is essentially a bird of swampy ground, lagoons, reeds, rushes and swamps.

Although they're not great flyers, they are good waders, swimmers and runners.

Pūkeko are cooperative breeders, with multiple male and female birds often sharing a nest and responsibility for incubating eggs and rasing chicks. Pūkeko can be aggressive and territorial. 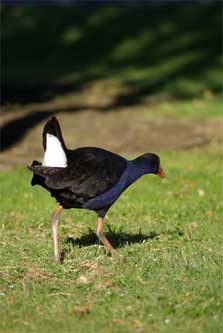 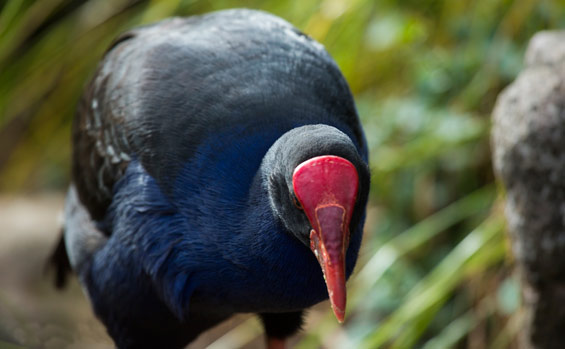 The pūkeko is well loved by many New Zealanders, winning Forest and Bird's Bird of the Year competition in 2011

Pūkeko are abundant and widespread and there is no threat to their long term existence.

They can be shot for sport during the shooting season.

Pūkeko have been culled in the past to protect threatened species. One example of this was on Great Barrier Island after an alarming drop in the numbers of New Zealand's rarest waterfowl species, the brown teal/pāteke. Research showed pūkeko were a major predator of ducklings, and residents had even seen pūkeko rip the heads off brown teal ducklings. After pūkeko numbers were halved the brown teal population stabilised.

Controlling one native species for the benefit of another is a hard decision, and not one taken lightly. In this case it was the only way to get pūkeko down to a safe number.

Pūkeko are not threatened, so DOC doesn't actively work with them.

Of course, the work that DOC does in plant and animal pest control increases the quality of whole ecosystems, and therefore contributes to the ongoing success of many common birds like the pūkeko, as well as ensuring the ongoing survival of our rarer more susceptible species.

DOC prioritises its work to protect the rarer species, in the context of their overall environment. This is encapsulated in the whakatauki (Maori Proverb):

One of our bird experts discusses the features of various New Zealand birds in a series of Radio New Zealand interviews.