The grey warbler is a relatively inconspicuous grey bird that flits about the canopy of the forest but its call permeates the forest and takes the edge off a hard uphill slog for any attentive tramper.

These diminutive insectivorous birds busy themselves along branches seeking out small invertebrates.

Grey warbler (Gerygone igata) was the surprise recipient of the title of New Zealand's best-loved bird in 2007.

Grey warbler perched on a branch 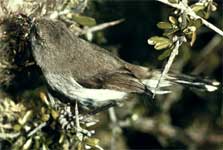 The grey warbler/riroriro are found throughout New Zealand.

They are a small grey-brown bird with pale grey on the face throat and breast and an off white belly and under tail.

Weighing about 6.5g, which is around one-third the weight of a mouse, makes them one of New Zealand's lightest birds.

They are insectivores with a habit of hovering to pick insects and spiders from plants.

Grey warblers are clever nest builders. They have distinctive domed hanging nests with a small side entrance hole.

They are one of few native passerines to have benefitted from human modification of the landscape.

"In the warm sunlight of advancing summer, when the manuka-scrub is covered with its snow-white bloom and the air is laden with the fragrance of forest flowers, amidst the hum of happy insect-life, a soft trill of peculiar sweetness—like the chirping of a merry cricket—falls upon the ear, and presently a tiny bird appears for an instant on the topmost twigs of some low bush, hovers for a few moments, like a moth before a flower, or turns a somersault in the air, and then drops out of sight again. This is the Grey Warbler, the well-known Riroriro of Maori history and song."
– Sir Walter Lawry Buller, A History of the Birds of New Zealand, 1888, London

Grey warblers are abundant and widespread and no threat to their long term existence is apparent.

Grey warbler in a tree fern 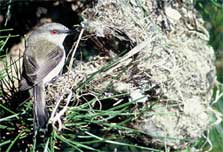 Grey warbler/riroriro are not threatened, so DOC doesn't actively work with them.

Of course, the work that DOC does in plant and animal pest control increases the quality of whole ecosystems, and therefore contributes to the ongoing success of many common birds like the grey warbler, as well as ensuring the ongoing survival of our rarer more susceptible species.

DOC priorotises its work to protect the rarer species, in the context of their overall environment. This is encapsulated in the whakatauki (Maori Proverb):

Grey warblers are quite common, although they are relatively shy and are heard more than seen. They will quite likely visit your garden if you plant native shrubs for them to safely build their nests in.